When it comes to finding a cure for type 1 diabetes, it’s actually been achieved dozens of times — in mice. Curing type 1 diabetes in the more complex system of a human being is a different challenge.

Many of the enthusiastic reports you might see in your newsfeed each year are largely successful “cures” in mice that have yet to be trialed on humans. Most, unfortunately, fail in human trials.

In this article, we’ll look at the top contender in the research to find a cure for type 1 diabetes, the clinical trials process any potential cure must go through, and the latest cure research that is working in mice. 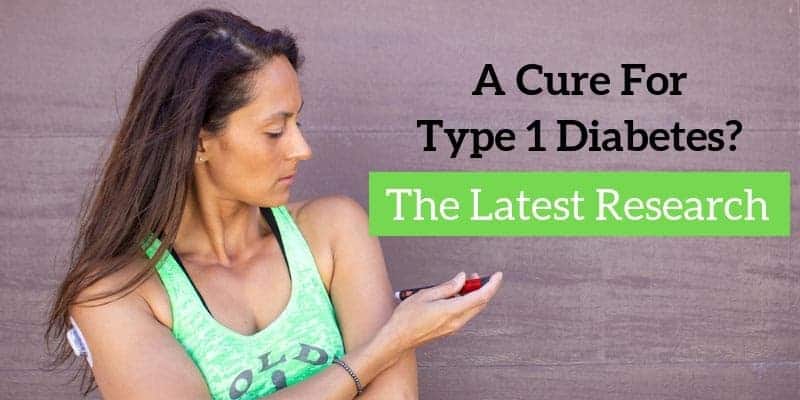 What would a diabetes cure need to accomplish?

While we often joke of needing a “new pancreas” as people with type 1 diabetes, what’s really failing within our body is our immune system.

In people with type 1 diabetes, your immune system is constantly attacking the beta cells produced by your pancreas that are essential for producing insulin. While your diagnosis may have been years or decades ago, your body still tries every single day to produce insulin.

Unfortunately, your immune system is still attacking and destroying those cells every single day, too.

In order for a treatment method to fully cure a person with type 1 diabetes, it would need to do at least one of the following:

Easier said than done. Let’s take a look at the top (and perhaps only) contender for curing type 1 diabetes in today’s current research.

The main contender for a type 1 diabetes cure

While you may see a variety of news articles each year with researchers claiming they’ve found a successful cure for type 1 diabetes, the majority fail in animal trial and are never heard from again because they don’t pass the early stages of long-term efficacy and safety.

“The majority of it is really lined with hope,” explains Kristina Figueroa, MSPH, who is an expert in type 1 diabetes clinical research and public health, and a passionate patient advocate.

Like most of us, Figueroa says that after her own type 1 diabetes diagnosis at age 6 in 1996, her healthcare team told her a cure was just around the corner. Due to the half dozen cures of type 1 diabetes in mice each year, it can seem that way.

The researched treatment efforts closest to a successful cure come down to one, maybe two, that have the potential to progress through each critical trial phase.

And hopefully, one day becoming available to all patients with type 1 diabetes.

Without a doubt, ViaCyte’s implantable capsule device is closest to paving the way to a successful cure.

First developed by doctors, ViaCyte’s technology was tested on over 1000 rodents with medically induced type 1 diabetes.

It currently has two clinical trials in progress with two different devices: the Encaptra capsule device which contains pancreatic beta cell precursors (also known as VC-01 or PEC-Encap), and the PEC-Direct works very similarly but is for a more vulnerable portion of the diabetes population.

ViaCyte began working with the University of California, San Diego (UCSD) as its first clinical site.

The PEC-Encap is a fully encapsulated product, and as such, does not require immunosuppression.

Once implanted within the skin, the precursor cells then mature into fully functioning endocrine cells that produce insulin and other hormones like amylin that play a critical role in stabilizing blood sugar levels.

However, the critical detail that makes or breaks ViaCyte’s success is the body’s ability to “vascularize” the product.

“Vascularizing means that blood is flowing through it, allowing the pancreatic progenitor cells to mature into insulin-producing islet cells,” explains Figueroa.

Figueroa adds that the procedure itself is fairly simple, though outpatient, and a short recovery period.

“And then, it takes several months for the product to get vascularized in your system, mature into islet cells and start producing useful insulin.”

Because the capsule isn’t connected in any way to the existing pancreas, and it’s safe from the patient’s self-destructive immune system, the beta cells can thrive and produce insulin to successfully manage blood sugar levels.

However, do keep in mind, it’s expected that patients would need to undergo the procedure perhaps every year in order to implant more progenitor cells; this is what ViaCyte is testing in the initial cohort of the ongoing Phase I/II Clinical trial with the smaller, sentinel units.

The longterm goal, she adds, is to make the regular addition of new cells a simple non-invasive procedure. And ideally, eventually no need for additional cells at all.

This form of the capsule technology works very similarly to the PEC-Encap but it has a few key differences.

PEC-Direct provides direct vascularization of the graft cells and thus does require chronic immunosuppression; as a consequence, the target population is the high-risk type 1 diabetes patient — more specifically, those patients with hypoglycemia unawareness or those with extreme “glycemic lability,” sometimes referred to as the “brittle diabetic.”

How long until ViaCyte’s cure treatment is widely available?

“It’s important to remember that, even though they’re making incredible progress, they still have a long way to go,” says Figueroa.

Figueroa points out that simply getting to phase 1 of clinical trials took ViaCyte more than 10 years. But they’re making progress.

There are currently two clinical trials in progress: the first is with the PEC-Encap technology. The second is with PEC-Direct. Let’s take a closer look at the phases they must achieve over the next decade:

Cohort 1 of this Phase I/II study was entirely focused on the capsule’s ability to become vascularized within the human body. This phase did not look at whether it managed blood sugars, but simply that the body was able to accept and make use of the capsule by flowing blood through it and picking up the insulin being produced by the cells in the capsule.

“It has to get into the patient’s bloodstream before it’ll start working and producing insulin,” reminds Figueroa.

ViaCyte accomplished this phase in 2018 with a small trial of 4 patients.

As ViaCyte begins Cohort 2 of the Phase I/II study, things get exciting because this is where they determine if the vascularized capsule will effectively produce insulin and manage a patient’s blood sugar levels.

In fact, they’re still recruiting patients for several locations of human trials for the PEC-Direct. Here are the locations:

To be considered for enrollment, a patient must fall within these categories:

If the patient has a history of the following, they would not be considered:

Once they are able to get 55 patients enrolled, vascularized, and able to proven efficacy, it could take another 2 years to compile that data and progress to Phase III of the clinical development plan,” explains Figueroa.

That means, if required by the FDA upon review of Phase I/II data, Phase III could potentially begin around 2022 if all goes well in phase I/II.

Phase III in clinical development is when a treatment method or drug is tested on a wider population of patients, for a longer period of time, and, oftentimes on a global scale

“This phase would need anywhere from 300-3,000 patients, and would likely need to be global,” explains Figueroa. “Going global is crucial because patients from one part of the world have different genotypes and phenotypes than patients in another part of the world”

Phase III would ensure the treatment method is effective for a larger part of the type 1 diabetes population, and also monitor the treatment uptake and adverse reactions after longer-term exposure. This phase would persist for 1 to 4 years to further determine safety, efficacy, and long-term stability in multiple sub-populations.

The phase we’re all hoping for is phase IV — when the treatment has proven to be widely safe and effective, and ready for the rest of us!

Ideally, if ViaCyte continues to thrive in each clinical trial phase, we could see the Encaptra delivery system commercially available by the year 2030. Hopefully…sooner!

The BCG (Bacillus Calmette Guerin) vaccine has existed for nearly 100 years. Originally designed to prevent tuberculosis in areas of the world with higher risks of developing the disease. Dr. Denise Faustman began researching the use of this vaccine in people with type 1 diabetes at the Faustman Lab at Massachusetts General Hospital.

The simple result was that the vaccine was regenerating (or repairing) the pancreas’ ability to produce beta-cells, which in-turn successfully produced insulin.

While it worked remarkably well in mice, it took much longer to see the impact on humans — nearly 3 years after the initial injection.

“This is to be expected,” explains Faustman. “Mice have much shorter life spans and are different in many ways. But like the mice, the lowering of blood sugars to the near normal range continued beyond the 8 years of the clinical trial.”

“We have learned that the NOD mouse model (and we were the first lab to reverse disease in end staged mice) is not perfect, but fortunately it did correlate for us. We now believe that the reason BCG takes a while to work is that it is permanently resetting the immune system.”

This understanding comes not just from Faustman’s team but also from a global coalition of scientists in research.

In the ongoing Phase III clinical trials with multiple sclerosis, there is a similar lag in autoimmune reversal of 2 years but then continuous benefit beyond 5 years with this simple and safe generic BCG intervention.”

And in 9 humans with type 1 diabetes

She has tested her research on a total of 9 patients with type 1 diabetes. While none are “cured,” most experienced significant reductions in insulin needs.

“We have a fully enrolled Phase IIb clinical trial underway that will read out in as early as 2022,” explains Faustman told DiabetesStrong. “Because of the size of our Phase II trial and BCG’s known safety profile and its generic drug status, we are hoping to pursue approval coming out of Phase II trial.”

Faustman adds that the BCG vaccine has demonstrated a clear and clinically significant response in the primary endpoint for type 1 diabetes trials: a stable and long-term return of blood sugars to the near normal range for over 5 years without hypoglycemia.

Despite Faustman’s passion and dedication to finding a cure, both the legitimacy of her work and the results have come under great scrutiny by the American Diabetes Association and the JDRF.

“I am still not sure why they chose to issue it, but it was a political not a scientific response to our work, which neither group has funded,” said Faustman.

Fortunately for the type 1 diabetes population, Dr. Faustman continues steadfastly on her work towards a cure despite lack of support from the larger diabetes organizations.

Other research in early stages of development

Launching from initial research by Doug Melton at Harvard, this method focuses on stem-cell therapy and has achieved a cure in mice.

“Semma’s science is focused on bringing the promise of stem cells to patients through generating billions of stem cell-derived pancreatic beta cells in combination with a state-of-the-art cell delivery technology,” explains their website.

This research from Purdue and Indiana University is using injections of a solution of collagen and pancreatic cells for a minimally invasive therapy that aims to reverse type 1 diabetes.

In mice with medically induced type 1 diabetes, it has proven to work within 24 hours, maintaining “insulin independence” for at least 90 days.

It’s described as being a Trojan-horse-like because the pancreatic cells are ushered in along with a protein the body already makes (collagen) for building muscle, bone, skin, and blood vessels.

The next step is a pilot clinical study on dogs that have naturally occurring type 1 diabetes.

If you liked this overview of the prospects for a cure for type 1 diabetes, please sign up for our newsletter (and get a sign-up bonus) in the form below. We send out a weekly newsletter with the latest posts and recipes from Diabetes Strong.

Suggested next post: What’s the Difference Between Type 1 and Type 2 Diabetes?