This is an excerpt from Ginger Vieira’s book, “Emotional Eating with Diabetes.”

You’ve probably tried a dozen (or two dozen) times to change your relationship with food over the past few years. Maybe you’ve vowed to never binge on food again during a low blood sugar, to never eat a whole pint of ice cream after a stressful day, and maybe you’ve even promised to never eat another gram of carbohydrate (or at least another potato chip) ever again in your entire life.

And it didn’t work. Within hours, days, or weeks you were back where you started: eating things you’ve told yourself are “bad foods,” impulsively eating “junk foods” and bouncing between trying to be “absolutely perfect” and eating anything you can get your hands on. 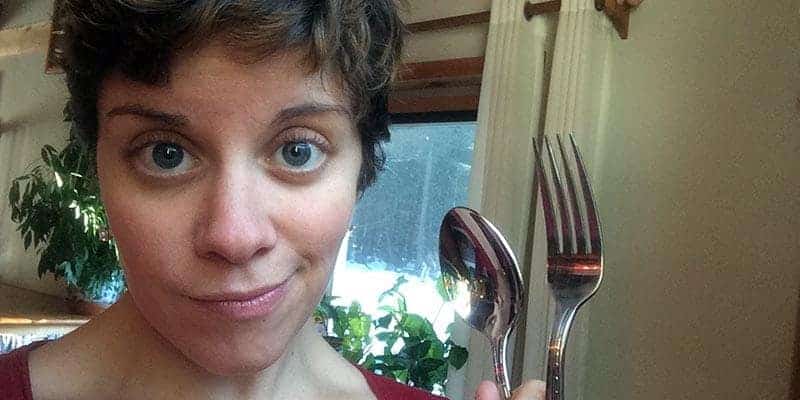 On our own, we tend to skip the very crucial step of acknowledging what’s really going on in our life, in our habits, and most importantly, in our thoughts that lead to our self-destructive behavior with food.

We overlook the first step where we actually acknowledge what really needs to change. In this post, we’re going to look at the three habits that commonly happen in the life of any person who struggles with overeating.

Here are 3 very common habits that feed the cycle of emotional over-eating:

Okay, let’s take a deeper look at these habits:

The Rules We Create for Ourselves

The trouble with these “rules” is that they give food more and more power over us. The more we try to restrain ourselves from a certain food, the more we binge on it when another part of our life feels out of our control, or simply when we’re hungry.

These rules also leave very few choices and require total, absolute perfection. I don’t know about you, but I cannot be perfect. Good news: we don’t need to be perfect in order to be healthy.

Instead, we can plan our sweets and treats. We will expect “mistakes” and imperfections in our overall nutrition plan. No food is “bad.” All food is just food. These changes in your “rules” around what you eat are crucial.

Starving Yourself During the Day

Many people who binge on food at night have starved themselves during the day. Your body needs calories, and it will demand that you eat those calories all at once, late at night, if it has to. Starve yourself during the day = overeat at night.

Think of your metabolism like a burning fire: if you stop adding wood to the fire, the flame will die down and eventually go out. When you don’t eat enough calories during the day, consuming just a few or none between breakfast and dinner, your metabolism actually thinks you’re starving it. Purposely.

It says, “Well, you aren’t feeding me, so I might as well slow down, and burn as little body fat as I can.” This applies to skipping breakfast, too. By not eating often enough you are actually telling your metabolism to burn less—to conserve energy, body fat, and calories. When you finally do feed your metabolism, it says, “Oh! Finally! I’m going to hold on to these calories as long as I can!”

Instead, when you eat small meals, often (every 3 to 4 hours), you are giving your metabolism a reason to burn! To fire up! To work hard! To use fat and calories. The easiest step to preventing overeating is to learn how to properly feed yourself throughout the day.

How You Make Decisions About Food

In diabetes, we are trained by books, television, doctors, parents, and friends that we cannot eat certain foods. We cannot eat candy, birthday cakes, ice cream, pizza, and chips. If it’s delicious or fun, we probably can’t (or shouldn’t) eat it.

This is a quiet but significant conversation you have with yourself over and over, perhaps before every single meal you eat. And it doesn’t help you. Instead, it might be making you feel as though the disease is trying to control you, limit you, and deprive you. You want to fight it. Gain control. Gain power over the disease by saying, “Shut up! I’m gonna eat whatever I want.”

But you pay the price in guilt, denial, high blood sugars, and weight gain. You abuse and overeat the food simply because it is “off-limits.” In the end, your actions are still being controlled by food.

Imagine, instead, if you told yourself, “I can actually eat whatever I want. This is my body. I choose. I’m the one who puts the food in my mouth. No one can stop me.”

Instead of feeling limited, you have every option, and every choice. You choose to respect your body by not overeating. Even when you choose candy, you are in control, not fighting. Instead of choosing candy with shame, in an attempt to fight against the reality of your life with diabetes, you are choosing it proudly, with awareness of your diabetes management. You take your insulin, and enjoy the food.

5 questions to ask yourself:

Remember, your relationship with food is just one big habit made up of several smaller habits. It can be changed, but changing it means changing how you think and behave around food. Creating new habits around food means honestly identifying what you’re currently doing that isn’t working for you, and be willing to try something totally different.

And of course, it ain’t gonna change overnight! Give yourself the chance to evolve gradually!

Suggested next post: Diabetes and Eating Disorder – How to Get the Right Support and Treatment.