Jennifer Christensen lives with type 1 diabetes and recently completed her first half marathon – even though she always used to say, “I don’t run!”

She shares how she found the motivation to run (from her best friend), the mental barriers she overcame, how she trained, and what she did to manage her blood sugar during and after runs.

This is a long post, but it’s a good one! 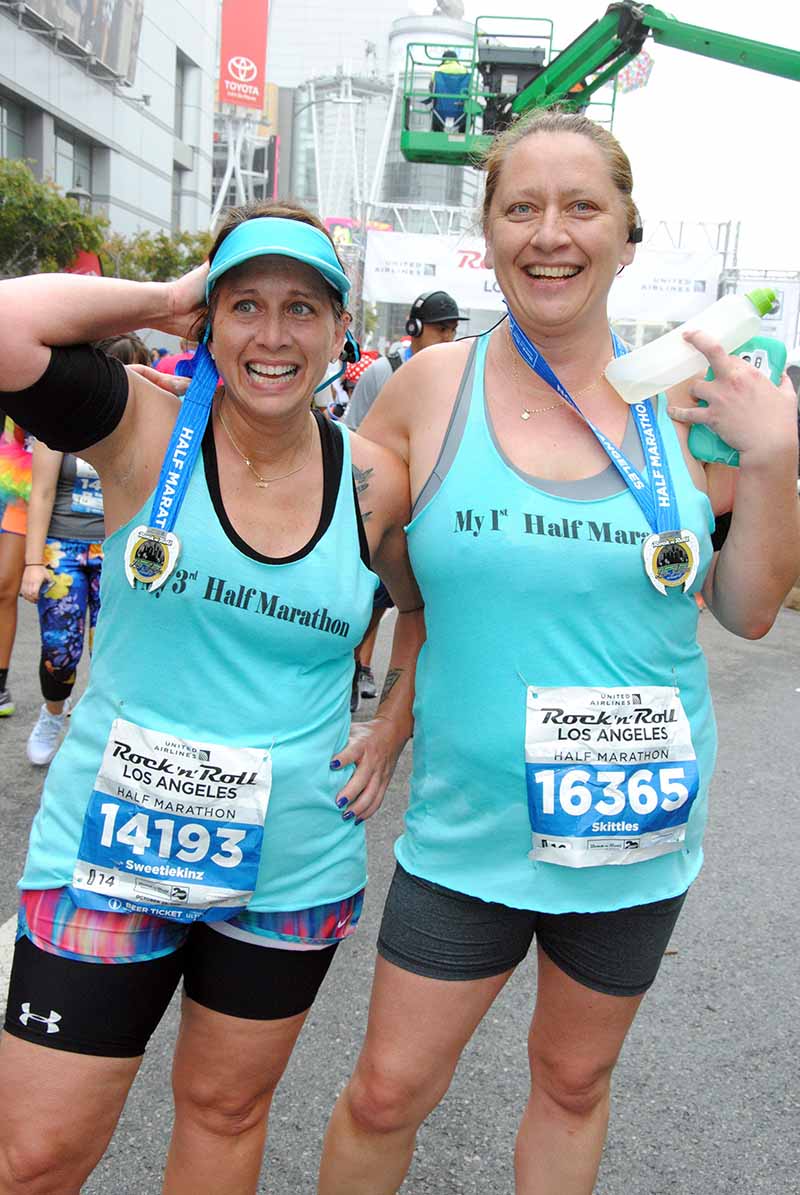 We’ve all heard the saying “Never Say Never” and thought that it was rather ridiculous to contradict yourself in the same sentence, or maybe that is just me. However, I’ve even said it myself. In fact, I said it just recently when I completed a Half Marathon in L.A. with my best friend.

Let’s back up to June…

Better yet, let’s back up to March.

To get this post, you should know that I am in an exercise competition with my best friend, Jenna, and I love how we keep it up. We’ve been doing this for 3 years now, and to say we are competitive would be the understatement of the year/decade.

So, starting in March of this year I stepped up my game to a whole new level. I had set a personal goal of dropping some weight and got myself a gym membership. Things were progressing nicely, and I was pleased to see results. A friend had even suggested that I should run a marathon, or half marathon and I said, “I don’t run. I will never do a marathon or even a half marathon.”

In June, Jenna and I went on one of our semi-annual “Laverne and Shirley” trips. It was a weekend of hiking, swimming, exploring underground lava tubes, yoga, and zip lining. The zip lining event will come back to bite me… or be the best thing to happen.

There were more than 30 zip lines suspended 15 to 80 feet in the pine trees. Now, a very important fact to know is that Jenna has a fear of heights. And not just a slight fear either. At one point we were on a platform 80 feet in the air, the tree was swaying, and there was a storm building on the horizon. Jenna was terrified! She was literally shaking and doubting her survival. 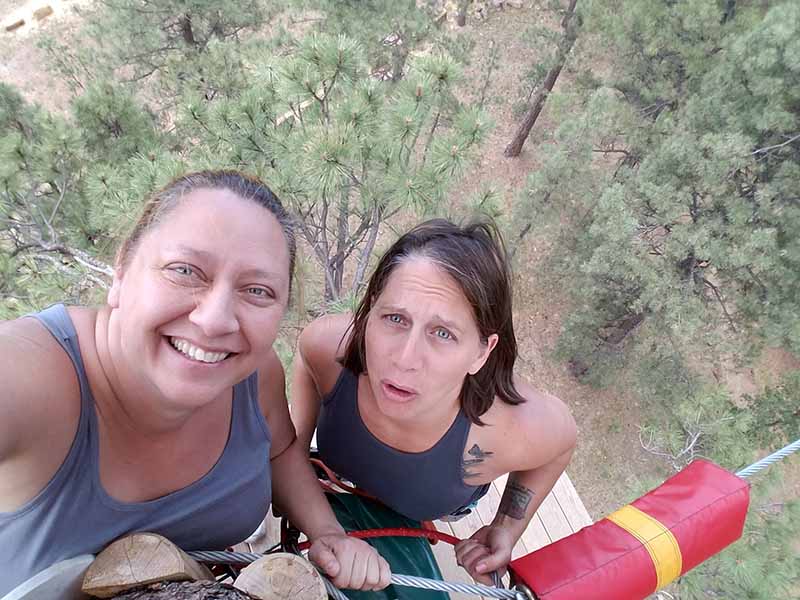 A month later as I was finishing up at the gym, Jenna texted me about possibly joining her in the half marathon she was registered for the end of October in L.A. I was already going to be traveling with her as her support and encouragement team. She was willing to walk/jog/run with me, or whatever I needed. I had been running a little on the treadmill and the thought had crossed my mind if I was physically able of doing one.

Jenna lived up to her best friend and biggest ally title. She told me that she doesn’t run half marathons to win so doing one with me would just make it more enjoyable, and helping me to push myself to a new level is just icing on the cake.

She even pointed out that we already span that many miles, plus stairs, in most of our previous weekend trips.

I was concerned with a time limit, but after looking it up, I discovered that I currently walked fast enough to complete within the necessary time. Jenna was even willing to slow her pace and have a worse finish time to stay with me and encourage me along the way.

I thought about it for a few days but didn’t say anything to anyone at first. I weighed all the pros and cons and almost had myself fully talked out of it.

That’s when I mentioned it to a lady at the gym.

Women in locker rooms can be some of the most encouraging people around. I told her about it and she said, “You could totally do it!” I still wasn’t sure though. That’s when she said, “She went zip-lining for you.”

Talk about getting hit in the gut!

I couldn’t argue against that in any way, shape, or form. Gym Lady was right. Jenna faced her fear for me, how could I not face mine for her? So, I registered that afternoon and sent Jenna the screenshot of my registration. I am still convinced I heard her scream with excitement.

I needed to start training. I had three months to be better than I currently was so that I wouldn’t let her down.

I talked with my doctor, and she encouraged me and had confidence I would do great. I also reached out to others that I knew who had completed marathons, both with and without Type 1 diabetes, for tips and tricks. I knew having Type 1 wasn’t going to stop me from this, but I also knew that it was going to take a little bit of extra work.

For the most part, I kept up with my other gym activities. I did back off on legwork so that they wouldn’t get overworked and be more fatigued. I knew that I should research food choices, but I also knew that changing things on that front wouldn’t necessarily help me.

I had spent the last many months working on improving my A1C and my time in range and had made huge progress and I didn’t want to mess that up with changing what I had discovered was working.

For my first few training runs, I reduced the basal on my pump so that I wouldn’t crash low while away from the house. That proved to be the wrong thing for me to do, as I ended up a whole lot higher afterwards.

The next few runs I left my basal alone and was able to maintain a range that I was comfortable with.

I knew that timing my meals around my runs was also very important. Food is always a tricky thing. When I started at the gym, I would have the worst highs during any workout. I had tried eating after the workout, but that was worse.

So, I tried having a protein shake every morning and when it was suggested to dump those and find something different I scoffed. How could a protein shake be so bad?  But I was willing to try just about anything so I stopped the shakes and moved to a different protein source.  One hard-boiled egg and a small glass of milk is now my go-to pre-workout meal.

Does it work every single time? No, but does anything? I’m still tweaking a few things and hopefully my post-workout high will be a thing of the past on a consistent basis.

My first really long run, and by long I mean over 7 miles, proved to be a different animal completely. I left my basals alone and did just fine, but fought going low for the next 24 hours.

It seemed that I was treating a low every hour or so and I had a very difficult time staying above 70. I knew that exercise could have a prolonged effect on blood sugars, but I had never experienced it to that degree before.

The biggest test was when I did my longest training run. I headed out for 11 miles. Blood sugars stayed relatively level, a bit of a climb at first and a fall halfway through. I treated with the snacks that I brought with me and kept going. I returned home higher than I wanted to be, but still ended up fighting lows for the next 24 hours.

One of my biggest concerns with running was my feet. I’ve had a total of five foot surgeries over the years and am really cautious of hurting them more. However, my feet were doing well.

I had gone to the running store to get a good pair of shoes and was very pleased with how they were working. I can’t say my feet didn’t hurt at all, but I can say they weren’t stopping me.

I was having one minor pain that wasn’t going away, and I wasn’t sure what it was. I decided it was in my best interest to have my podiatrist check over my feet to make sure I wasn’t doing something wrong, and that any damage I did do he could fix when I got back.

The pain I was having turned out to be a joint strain with no signs of stress fracture. I was relieved!  A good tape job and I was back in the game.

To make sure that the tape itself wouldn’t cause issues during the race I did a 5 mile run.  No problems at all. No blisters. No irritations. In fact, my foot hadn’t felt that good in months!

Race day weekend was finally upon me. I was nervous. I was excited. I was confident. I was doubting myself.

My blood sugars decided that midnight the night before was a perfect time to climb and stay there. I was stuck around 220 and no amount of insulin was making it budge.

I didn’t want to over bolus and plummet halfway through the race so I tried to calm my nerves and breathe. 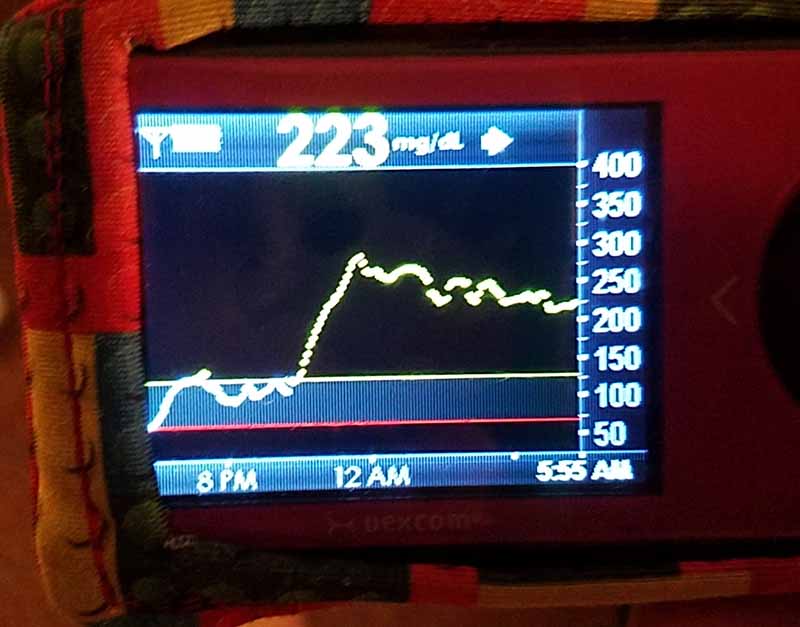 Thirty minutes into the race I was even higher. I didn’t know what to do. I had done all that I knew and I was at a loss. I kept reminding myself that the insulin would hit, that I would come down, that I’d be okay.

Running felt horrible. I was more winded, and my legs felt like they were filled with lead, but I kept going. I focused on the songs on my playlist. I distracted myself with conversations, both with friends and with myself. By the time I checked my levels again I was in a much more comfortable range. I was feeling better, running better, and breathing better.

The final mile was ahead of me and I would love to tell you that I didn’t really doubt myself, that I saw the finish line and pushed harder, but I didn’t…not without my best friend at my side. She came up beside me, made sure I was okay, and said, “Let’s do this!” We sprinted the last 100 yards and crossed the finish line at the same second.

We did it. We completed a half marathon together. I completed in under the time I wanted to. 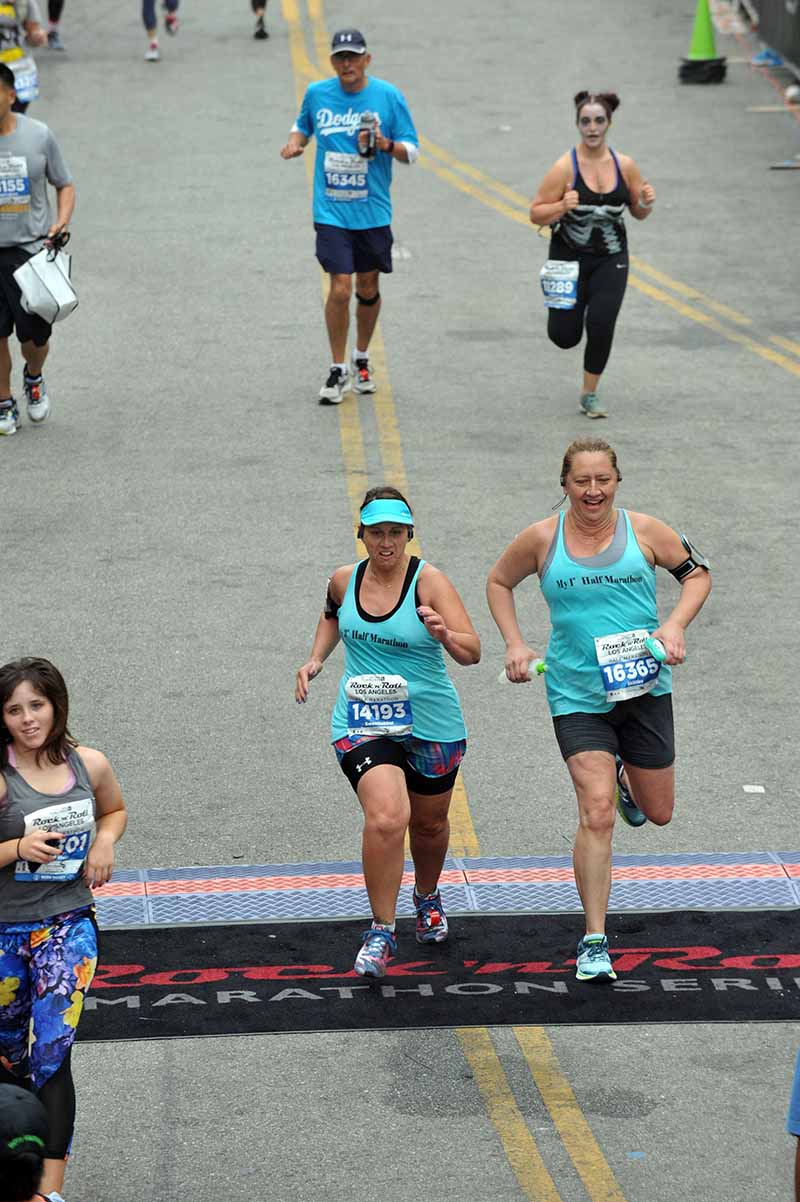 I realized that I succeeded with something that I had sworn I would never do. I laughed to myself with my “Never Say Never” and told myself that I would never say ‘never say never’ again.

It reminded me how in life we should really never say never because someday we just might do what we thought we could never do.

I want to thank those who never gave up on me. Jenna and others closest to me who encouraged me, believed in me, and pushed me to do what they knew I could do even when I wasn’t so sure myself.

Thank you for that!!