Trigger finger is actually incredibly common in people living with diabetes. While it affects the non-diabetic population, too, the most effective treatment and the path to relief for those with diabetes has proven to be very different.

In this article, we’ll look at what trigger finger is, what causes it and increases your risk of developing it, and what the most effective treatment options are for people living with diabetes. 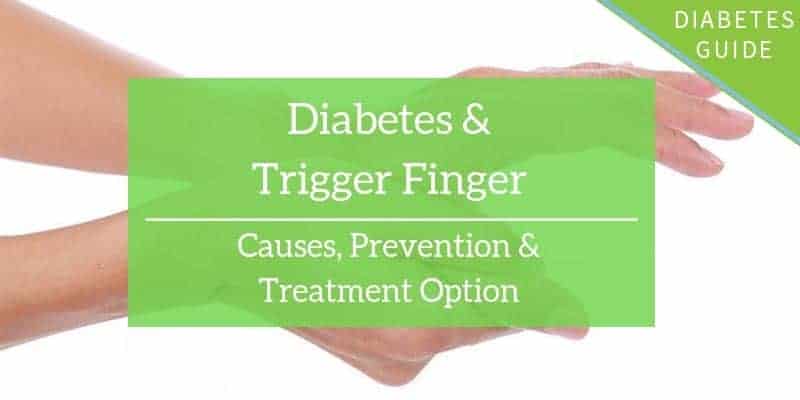 What is trigger finger?

This condition is an issue within your musculoskeletal system that affects the tendons and ligaments in your fingers, particularly the “tendon sheaths.”

Just as it sounds, trigger finger is characterized by your finger forming into a bent position as if you were pulling the trigger on a gun. It can develop in any of the tendons of any of your fingers.

The first signs and symptoms will include swelling, stiffness, and pain. You may eventually develop a bit of a “bump” around the joint(s) of that finger or where it connects to the palm of your hand.

What’s going on physically within that finger and it’s tissues is severe inflammation in the sheath of the tendon that acts much like a restraint. Instead of gliding back and forth, it becomes stuck, further inflamed and irritated, and eventually locked in that bent position.

The exact cause of trigger finger is still unclear. However, there are certain things that increase your risk of developing the condition.

Research has determined that most cases of trigger finger developing between the ages of 40 to 60 years old. Women are more likely to develop trigger finger than men.

In fact, patients with type 1 diabetes or carpal tunnel syndrome are twice as likely to develop trigger finger compared to the general population, according to a 2012 study from Massachusetts General Hospital in Boston, MA.

The 2012 study from Massachusetts General hospital also reported that 22 percent of patients who had been treated for trigger finger developed the condition in another digit within 2 years.

A 2010 study from Kakegawa City General Hospital, Kakegawa, Japan, concluded an even higher risk of trigger finger in the diabetes population, stating this population is 4 times more likely to develop trigger finger compared to the non-diabetic population.

This Japanese study also found that the risk of developing trigger finger was significantly higher in insulin-dependent patients.

Treating trigger finger in people with diabetes should be approached differently than in a non-diabetic patient.

The most common treatment options for all cases of trigger finger include:

While 66 percent of trigger finger cases in non-diabetic patients can be treated effectively with steroid injections, that’s not the case for the diabetes population.

Using steroids in people with diabetes can be tricky, as steroids lead to nearly immediate and prolonged increased blood sugar levels that are very difficult to combat with an increase in insulin doses.

Some patients may find they need as much as 50 percent more insulin in their system to counter the side-effects of steroids on their blood sugar levels. Since managing blood sugar levels as tightly as possible is a crucial part of recovering and managing trigger finger in people with diabetes, this creates a nearly impossible environment that will not promote healing.

Research has also found that steroid injections for trigger finger in patients with diabetes simply isn’t effective in treating the condition, according to a study published in The Journal of Hand Surgery. While approximately 28 percent of the non-diabetic population requires surgery to properly correct trigger finger, 56 percent of patients with diabetes will require surgery.

When it comes to the cost of treating trigger finger in people with diabetes, a 2016 study from Brigham and Women’s Hospital in Boston, MA took into account a 35 percent failure rate of treating with corticosteroid injections.

While one injection into a jointed area like the finger can cost as much as $300 per injection, it’s important to remember that a patient with diabetes would likely need multiple injections.

Very simply, the number one thing you can do to prevent trigger finger as a person with diabetes is to manage your blood sugars as healthfully as possible.

If that means talking to your doctor about additional medications or asking for help with persistently high blood sugars, don’t wait. Trigger finger can be a painful and frustrating condition.

While healthy blood sugar management alone does not guarantee you won’t develop trigger finger, it is the most important thing we can do as people with diabetes to greatly reduce our risk of developing the condition.

If you think you are developing trigger finger, avoiding repeated gripping motions and resting your fingers as much as possible can also help prevent the condition – but even total rest is not a guarantee that you won’t develop trigger finger.

If you found this guide to diabetes and trigger finger, please sign up for our newsletter (and get a sign-up bonus) in the form below. We send out a weekly newsletter with the latest posts and recipes from Diabetes Strong.