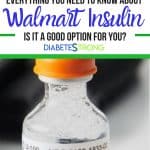 The cost of insulin is a serious problem for many people who live with insulin-dependent diabetes in the United States.

That’s why some people turn to Walmart’s ReliOn Insulin and other over-the-counter insulins.

In this article, we’ll discuss what kinds of insulin are available from Walmart’s “ReliOn” brand, what they cost, how they work, and if they are a good option for you.

Update: We have added a list of announcements and new products to the end of this article. Please read the full article before skipping to the end as it’s important to understand the different types of insulin available from Walmart before choosing one.

The over-the-counter insulin from Walmart that costs about $25 per vial is limited to two types of insulin:

You can also get a premixed combination of NPH and Regular called 70-30.

Both of these insulins are what’s called “synthetic human insulin”. It’s different from newer insulins that are called insulin analogs.

Both require a very rigid eating schedule. In the “old days” of type 1 diabetes management, a patient taking Regular and NPH insulin would have to eat a very specific number of carbohydrates every 2 to 3 hours.

If you don’t adhere to a consistent eating schedule and carbohydrate quantity, you will experience recurring severe low blood sugars.

For example, as a child with type 1 diabetes in the 90s, I followed a regimen like this:

Your life is ruled by the clock when you’re taking these types of insulin compared to the flexibility and freedom that comes with today’s insulin options.

Patients who switch to these insulins without guidance from a healthcare professional may be unaware that these insulins do not work in the body like the newer insulin they were likely taking before. This can lead to severe blood sugar fluctuations and be potentially fatal.

Let’s take a closer look at Regular and NPH insulin.

Regular insulin is also referred to as “short-acting” insulin and is taken several times per day.

It used to be the only option for managing your blood sugar around meals, but compared to today’s “rapid” and “fast” acting insulins, Regular insulin is very slow-working because it stays in your system for a long time, up to 8 hours, and peaks nearly 4 hours after injecting it.

If you don’t eat every 2 to 3 hours while taking multiple daily doses of Regular insulin, you will experience multiple low blood sugars.

In hospitals, patients will find that when receiving insulin via IV, short-acting insulin is still commonly used based on traditional “sliding scale” insulin dosing protocols.

NPH insulin is also referred to as “intermediate-acting” insulin. It used to be the only “background” insulin option, but much like Regular insulin, it pales in comparison to today’s other background options.

NPH only stays in your system for anywhere from 10 to 16 hours and has to be taken twice per day in order to cover your 24-hour background insulin needs.

It also takes several hours to become active in your bloodstream, and it peaks at approximately 4 to 6 hours after taking it. Today’s long-acting insulin options — Basalgar, Lantus, Levemir, Tresiba, Toujeo — have generally no peak at all.

The peak in NPH contributes to the rigid eating schedule a person must follow if they’re using these older insulins to manage their blood sugars.

Do you need a prescription?

In short, no, you do not need a prescription to buy Walmart’s Regular or NPH insulin. However, you won’t find it sitting on the counter next to the Tylenol either.

You’ll have to go to a Walmart store and ask a pharmacist for a vial in order to purchase it.

While it’s considered an “over-the-counter” medication now, it’s still managed very carefully by the pharmacy because it needs to be refrigerated and it’s still a high-value medication despite being only $25 per vial.

Is Walmark insulin a good option for you?

Considering that today’s most modern insulin options cost at least $300 per vial, the affordability of Walmart’s insulin is appealing. Unfortunately, the rigid schedule and limitations of these insulins truly make them a “last resort” option.

They are especially challenging for younger children who have unpredictable eating habits and an inevitably lesser understanding of how important it is to eat a specific amount of food at a specific time of day.

These insulins will help you stay alive if you truly cannot afford more modern insulin. If they are the only type of insulin you have access to, then yes, it is a good option for you.

If you can get more modern insulin through your health insurance or one of the many financial assistance programs that exist today, you’d be better off going that route.

Sure, it’s nice that these older insulins are easily accessible but they are not the solution for a long, healthy, full life for a person with diabetes. They are the last resort.

July 6, 2021 – Walmart today announced that it will begin selling its own private brand, rapid-acting, analog insulin called ReliOn NovoLog. The new insulin is now available in Walmart pharmacies and is expected to also be available in Sam’s Club stores in mid-July. You need a prescription to purchase this insulin.

Walmart’s private label insulin will be manufactured by Novo Nordisk and is similar to Novo Nordisk’s NovoLog brand.