Home » Diabetes » MODY Diabetes: Everything You Need to Know

MODY diabetes or “maturity-onset diabetes of the young” is a rare kind of diabetes that runs in families. It isn’t nearly as common as type 1 and type 2 diabetes.

In this article, we’ll discuss what MODY is, the most common symptoms, the different types of MODY and their treatment options, and the longterm complications. 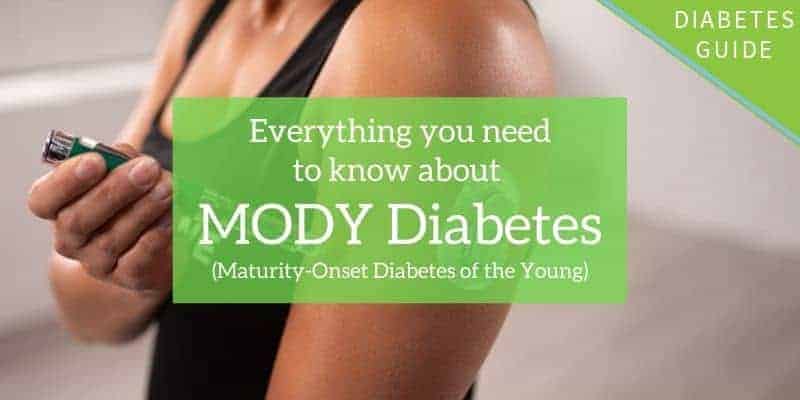 What is MODY diabetes?

While it’s similar to both type 1 and type 2 diabetes, the biggest difference is that it is a genetically inherited form of the disease.

Research from the Diabetes, Metabolic Syndrome & Obesity: Targets & Therapy (DMSO) journal estimates that MODY accounts for only 1 to 2 percent of diabetes cases, and is almost always first misdiagnosed as either type 1 or type 2 diabetes.

“It is often difficult to distinguish MODY from these two forms,” explains the study because the attributes of MODY include key aspects of both type 1 and type 2 diabetes.

Where MODY is similar to type 1 diabetes is in the body’s struggle to produce enough insulin, and it often develops during adolescence or early adulthood.

“MODY is a dominant genetic condition, which means that people who inherit one copy of the gene mutation that causes MODY from either their mother or father will be affected,” explains Harvard Health Publishing (HHP).

“Affected people also have a 50% chance of passing along the gene mutation to each of their children,” adds the HHP.

On the other hand, MODY isn’t usually treated first with insulin, which is where it appears more similar to type 2 diabetes.

While MODY isn’t related closely to bodyweight or obesity, research has found that an obese person with an undiagnosed MODY gene mutation may develop the condition earlier in life compared to someone at a healthier bodyweight.

At first, most types of MODY can easily look like type 1 or type 2 diabetes because higher blood sugar levels often result in the same symptoms:

Like type 2 diabetes, these symptoms usually develop gradually over the course of months and months, which is why it often goes unnoticed for a long time or is only diagnosed during a routine blood draw.

Research from the DMSO journal also found that people with MODY often have one or more of the following features:

While a person who is obese can develop MODY, it is especially difficult to differentiate type 2 diabetes from MODY in this case. Only through genetic testing would you likely be able to pinpoint if an obese person has MODY or type 2 diabetes.

“This type of testing will determine the exact type of MODY, and can be done before a patient has any symptoms,” explains the HHP. “If a mutation in one of the MODY genes is found, then type 1 or type 2 diabetes can be ruled out.”

How is it diagnosed?

Because MODY can result in a variety of symptoms (or no symptoms at all), the only way of diagnosing it is with a blood test. If your blood sugar is high, the next step is to figure out what type of diabetes you have.

Your doctor should ask you about any family history of diabetes to determine if you are likely to have MODY and suggest genetic testing to confirm a diagnosis. The doctor will take a sample of DNA from your saliva or blood and send it to a lab that will look for changes in any of the genes that can cause the condition.

What really sets MODY apart from other forms of diabetes are the 11 different genes that largely affect how the disease manifests, and how it’s treated.

Of these 11 known types, there are 4 genes that account largely for most of these types, as described by The British Diabetic Association (TBDA).

Most types of MODY are expected to gradually worsen, requiring gradual increases in medications and eventually insulin for some.

“This gene causes about 70 percent of cases of MODY,” explains TBDA. “It causes diabetes by lowering the amount of insulin made by the pancreas,” and usually develops before the age of 25.

MODY 1, 3, 4 are generally managed through taking a sulfonylurea, which is a category of diabetes medication that helps to increase the amount of insulin your pancreas produces.

MODY 2 can often be treated through changes in your diet and ensuring that you exercise regularly. This type of MODY doesn’t usually worsen or require further treatment.

MODY 5 usually involves other medical issues aside from just high blood sugar levels. The kidneys, for example, can be significantly impaired, more so than the pancreas.

While the HNF4 gene doesn’t account for all types of MODY 7 through 11, it is one of the more understood types in this overall rare group.

“The HNF4-alpha gene isn’t as common as the other forms of MODY,” explains TBDA.

MODY 7, 8, 9, 10, 11 are considered more recently discovered but current research and understanding of these types imply they can be managed similarly with a combination of diet, exercise, and sulfonylureas.

“People who have inherited a change in this gene are likely to have had a birth weight of 9lb or more.”

People with this gene often experienced a significantly low blood sugar shortly after being born that required treatment beyond breastmilk.

Some people with this gene may eventually need to take insulin injections.

“People with this type of MODY can have a variety of problems including renal cysts (cysts of the kidneys), uterine abnormalities and gout, as well as diabetes,” explains the TBDA.

“Often the renal cysts can be detected in the womb before a baby is born.”

This type is different than the majority because isn’t the result of too little insulin. Instead, when this glucokinase gene mutates and no longer works properly, your body isn’t able to recognize higher than normal blood sugar levels.

“Blood glucose levels in people with glucokinase MODY are typically only slightly higher than normal, generally between 99 to 144 mg/dL,” explains TBDA.

Because blood sugar levels in a person with this type of MODY don’t rise high enough to result in noticeable symptoms, it’s often spotted and diagnosed only by accident — for instance, during pregnancy.

The treatment plan for this type of MODY is simply through eating a generally healthy diet, getting regular exercise, and maintaining healthy body weight.

Like every type of diabetes, MODY comes with the common consequences and complications of persistent high blood sugars if it goes unmanaged.

Overall, managing MODY calls for similar guidelines around nutrition and exercise as every other type of diabetes. And then, for some, additional medications — including insulin — may be required.

You can still live a very full life with MODY!