While there are certainly other issues at play in the cause of these conditions, the one you have the most ability to manage and improve is your body’s resistance to insulin.

In this article, we’ll discuss the symptoms and causes of insulin resistance, and what you can do to improve it. 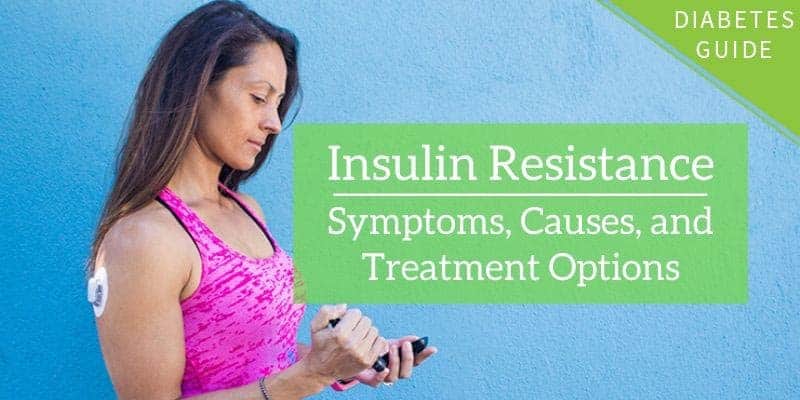 What is insulin resistance?

Insulin resistance is defined by your body’s inability to fully use insulin either produced by your pancreas or taken via injection or insulin pump.

“Insulin resistance is when cells in your muscles, fat, and liver don’t respond well to insulin and can’t easily take up glucose from your blood,” explains the National Institute of Diabetes and Digestive and Kidney Diseases (NIDDK).

“As a result, your pancreas makes more insulin to help glucose enter your cells. As long as your pancreas can make enough insulin to overcome your cells’ weak response to insulin, your blood glucose levels will stay in the healthy range.”

When your body can no longer produce enough insulin to compensate for increased levels of insulin resistance, your blood sugars start to rise. This is one of the two primary culprits behind the development of prediabetes and type 2 diabetes.

Certain medicines, such as glucocorticoids, some antipsychotics, and some medicines for HIV can also increase the risk of developing insulin resistance.

In a healthy body, beta-cells are produced by the pancreas and are then responsible for producing insulin. In some people with type 2 diabetes, those beta-cells aren’t healthy enough to properly produce insulin which eventually leads to rising blood sugars.

While there are certain medications to help improve beta-cell function and the production of healthy beta-cells, it is still a significant obstacle. This is why reversing type 2 diabetes is not necessarily possible for everyone.

The problem with insulin resistance is that it usually develops very gradually, which means that your blood sugars could increase to harmful levels and go unnoticed for years before a diagnosis of prediabetes or diabetes is properly made.

“Insulin resistance and prediabetes usually have no symptoms,” explains the NIDDK.

Two of the earliest signs of insulin resistance can include:

Unfortunately, even though blood sugar levels are rising so slowly that you wouldn’t qualify for a type 2 diabetes diagnosis in those earlier years, research has found that there is still considerable damage occurring in vulnerable areas like your eyes, which leads to retinopathy.

“Doctors most often use the fasting plasma glucose (FPG) test or the A1C test to diagnose prediabetes. Less often, doctors use the oral glucose tolerance test (OGTT), which is more expensive and not as easy to give,” explains the NIDDK.

While the A1c test is a useful tool in the diagnosis and management of type 1 and type 2 diabetes, it can actually miss the diagnosis of prediabetes because it essentially reports an “average” of your blood sugar levels over the prior 3 months.

The OGTT test, on the other hand, measures how well your body is able to manage your blood sugar after a meal and can catch signs of insulin resistance and prediabetes more effectively.

“People with prediabetes have up to a 50 percent chance of developing diabetes over the next 5 to 10 years,” adds the NIDDK.

The NIDDK recommends being tested for prediabetes if:

“If the results are normal but you have other risk factors for diabetes, you should be retested at least every 3 years.”

If your insulin resistance has gone unnoticed to the point of developing type 2 diabetes, these are the most common symptoms of persistent high blood sugar levels

*Learn more about the symptoms of type 1 and type 2 diabetes.

Let’s take a look at all of the potential ways you can treat and improve your body’s resistance to insulin.

First and foremost, improving your choices in what you eat is a critical part of improving insulin resistance. No drug in the world can compensate for a diet high in fatty, starchy processed ingredients.

Improving insulin resistance through your diet doesn’t require an extreme diet or cutting out an entire macronutrient. Instead, it’s really quite simple: eat more real food.

Highly processed foods contain the lowest quality sources of dietary fat and carbohydrate. While the occasional pizza dinner isn’t going to throw your health off the rails, daily servings of food like pizza absolutely will.

Striving to eat a diet focused on whole foods, with many servings of vegetables, high-quality sources of protein and fat, and non-starchy carbohydrates is going to have a lifechanging impact on your insulin resistance and blood sugar levels.

Get moving. Every day.

Exercise helps your body burn more glucose. The more you exercise, the more glucose you burn, even afterward when you’re resting!

Regular exercise doesn’t have to happen at the gym or require grueling sessions of push-ups and sprints.  Simply walking for 30 minutes every day after lunch can have a huge impact on every part of your health, including insulin resistance.

If you’re juggling pain in your joints or other limitations, you still need to get moving. The more you avoid activity, the less those joints will self-lubricate and the more those joints will hurt and stiffen.

Get up. Get moving.

Excess body fat blunts your body’s sensitivity to insulin. Even losing (and maintaining) a 10-pound weight loss makes a difference.

Adipose tissue is a fancy name for body fat and continues to be a primary driver of insulin resistance.

“Therapeutic lifestyle change continues to be the most important intervention in clinical practice to improve adipose tissue function and avoid the development of insulin resistance and related cardio-metabolic complications,” explains a 2013 study.

The most impactful thing you can do to combat insulin resistance is to lose weight, largely by improving your nutrition and getting daily exercise.

Regular binge-drinking has also been linked to an increased risk of type 2 diabetes via insulin resistance.

“Binge drinking, which is defined as the consumption of five drinks of alcohol within 2 hours in men or four drinks in women, once a month or more often is associated with an increased risk for developing the metabolic syndrome and type 2 diabetes,” explains this 2013 study.

Simply put, alcohol should be considered an indulgence, not something you consume on a daily basis. It is a toxin — something your body views as a poison it must eliminate from your body as quickly as possible.

Just like cupcakes and Chinese food, making alcohol something you enjoy once or twice a week will benefit every part of your health, especially your body’s insulin resistance.

Quit smoking (or any other tobacco habit)

Nicotine has a remarkable impact on your body’s insulin resistance.

“We found a linear dose-response relationship between cigarette consumption and type 2 diabetes risk; the risk of type 2 diabetes increased by 16% for each increment of 10 cigarettes smoked per day,” explained a 2017 study from Japan.

“The risk of type 2 diabetes remained high among those who quit during the preceding 5 years but decreased steadily with increasing duration of cessation, reaching a risk level comparable to that of never smokers after 10 years of smoking cessation.”

In fact, after smoking a cigarette, vaping, or chewing tobacco, it can take up to 48 hours for nicotine to be cleared from your body and insulin sensitivity to return to your “normal” level.

There are two things in your life that can keep stress hormones like cortisol and adrenaline consistently higher than normal: frequent stress and too little sleep.

Maybe your stress is the result of an intense job, the death of a family member, or an unhealthy relationship. Regardless, it’s increasing hormones like cortisol which blunt your body’s ability to make use of insulin. In short, these hormones make insulin less effective at managing your blood sugar.

Getting too little sleep is also a huge contributor to increased cortisol levels.

If you can make getting more sleep and reducing significant sources of daily stress a bigger priority, you will improve your level of insulin resistance.

Let’s take a look at the best pharmaceutical options on the market today that can help to improve your body’s struggle with insulin resistance.

Thiazolidinediones are a class of drugs designed to improve your sensitivity to insulin by reducing the amount of concentrated fat circulating throughout your body.

Medications on the market today in this class include:

They can also be taken in addition to other diabetes medications like metformin or sulphonylureas, like Glucotrol or Diabeta.

One of the primary potential side-effects, unfortunately, includes weight-gain.

This class of drugs works by improving your body’s overall sensitivity to insulin, and by reducing the amount of glucose produced by your liver.

Medications on the market today in this class include:

One of the notable benefits to metformin and other biguanides is that they don’t generally cause weight gain. Unfortunately, metformin — which is one of the most widely prescribed drugs on the planet — does come with uncomfortable digestive side-effects, some of which can be lessened by trying the “XR” or “extended-release” version after trying the original version.

At the end of the day, improving your body’s insulin resistance starts with your lifestyle choices. From there, medications can help but nothing will compensate for those habits.

You don’t have to aim for perfection. Instead, aim to make gradual improvements!

If you found this guide to insulin resistance useful, please sign up for our newsletter (and get a free chapter from the Fit With Diabetes eBook) using the form below. We send out a weekly newsletter with the latest posts and recipes from Diabetes Strong.