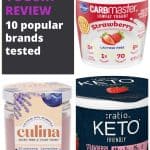 Yogurt can be a great inclusion in a healthy diet, but unfortunately, some yogurts resemble desserts rather than healthy snacks as they can be filled with sugars and high-carb toppings.

Luckily, more and more low-carb yogurts have become available in the last couple of years and many of them are tasty alternatives to regular yogurt.

In this review, we’ll look at some of the low-carb yogurt options currently available in many supermarkets and online.

How I ranked the different brands

Net carbs are calculated as the total carb amount minus fiber. We look at net carbs and not total carbs because fibers don’t get converted into glucose in your digestive system and therefore don’t impact blood sugars.

I have tried each of the 10 yogurts myself so I can give you my honest opinion on taste, texture, and blood sugar impact.

I have given each yogurt a score from 1-5 based on:

These are of course subjective measures, but I hope this review will still give you get a good idea of which brands are good and which have room for improvement.

I have listed the yogurts based on the net carbs per serving, from lowest to highest.

To my surprise, I REALLY liked this yogurt. I’m surprised because I usually don’t enjoy most keto products but this was excellent. The texture is smooth and silky with a distinct berry flavor. It’s not too sweet and I really enjoyed eating it.

You’ll find this product with the other yogurts in the yogurt aisle, but it’s actually advertised as a dairy snack. I’m not exactly sure why as it’s a milk-based product.

It’s surprisingly high in protein (15 grams) for a keto snack but it only has 2 grams net carbs and 1 gram of sugar in a serving.

Because it’s a keto snack, it’s high in fat and therefore also fairly high in calories compared to other low-carb yogurts. So if you’re looking to limit your calories, be careful with this one because it’s hard to only eat part of it, it’s that good.

Most people will probably get away with not even having to take any insulin with this yogurt, but if you do, be mindful that the high-fat content could delay any blood sugar impact.

Overall, this is a pretty good low-carb yogurt. The texture is fairly creamy but I would like it to be a bit firmer. That could be a preference thing though. The taste was really good and I could clearly tell that it was strawberry yogurt.

It’s sweetened with stevia and natural flavors but does not have any fruit pieces in it. That combination means that they have been able to keep the carb count amazingly low at only 3 grams per serving. I’d say that’s fairly unusual for a fruit-flavored yogurt.

It also has a very limited blood sugar impact. I did need a little bit of insulin to prevent a blood sugar increase, but I only needed ½ unit of rapid-acting insulin.

Since it’s Greek low-fat yogurt, the calories (80 calories) and fat (2 grams) are also low, while it packs 12 grams of protein, which makes it a good option for anyone wanting to limit their calorie intake.

I bought this in Whole Foods and it’s one of the nastiest things I’ve ever tried to eat, so the low score is mainly based on taste. I can’t provide any experience on how it impacts blood sugars as I didn’t manage to eat more than a single teaspoon.

It’s too bad as it’s one of few low-carb non-dairy options. It’s made with almond milk, which means that it’s higher in calories and fat than most of the other low-carb yogurt options.

It took me a while to decide if I like this yogurt, but I finally decided that I do, which is why it ends up with such a high rating. The taste reminded me of those old-school yogurts we got back in the 1980es. That’s not good or bad, it’s just old school.

The yogurt is fairly creamy and has an overall good texture. It tastes a little artificial which is weird given it’s mainly sweetened with fruit puree, but it could be the Sucralose that they have added.

The yogurt is very low in net carbs and it hardly impacted my blood sugar which is definitely a plus. According to the label, it’s also completely Lactose-free, which is a benefit for those looking to reduce or eliminate lactose.

This has been my go-to yogurt for years. It’s a little different from the other yogurts in this review as it’s plain yogurt. I usually add a little stevia or fruit myself to add a bit of flavor.

I’ve been eating this yogurt due to its high protein content (It’s the only low carb yogurt I’ve found that packs 18 grams of protein per serving!), low carb, and low-calorie profile, and because it’s a plain yogurt I can add whatever flavor to it I like.

I do see a small blood sugar impact from this yogurt, probably due to the lactose and high protein content.

This yogurt is sold as a health-conscious choice. The triple zero refers to the yogurt having 0% added sugar, 0% artificial sweeteners, and 0% fat.

As with some other yogurts, the whey is often separated from the “solid” yogurt when you open the container, but once mixed, the yogurt has a nice silky smooth consistency.

The peach flavored yogurt has a somewhat sickly orange hue to it and I wouldn’t say it tastes much like peach. It’s not very sweet either, so the overall experience is somewhat disappointing,

From a blood sugar perspective, the yogurt didn’t do much more damage than I’d expect 7 grams of carbs would do. I didn’t see a spike and with about 1 IU of insulin (what I need for that amount at the time of day that I ate the yogurt) I hardly saw any blood sugar increase at all.

I found this yogurt at Whole Foods and it’s pretty good. The texture is really creamy and it had small pieces of actual fruit mixed in.

The yogurt has no sugar added or any other sweetener so it’s a little too sour for my liking. I tried the strawberry and the peach-flavored yogurt. Since they seem to rely on the little fruit that has been added, the overall taste is very mild.

Because it’s a Greek-style yogurt, the protein content is pretty good at 11 grams per serving and because it’s not sweetened with sugar, the total carb count of 8 grams comes from the fruit and lactose only.

I did have to inject insulin for it to not raise my blood sugar, but that’s to be expected when I consume 8 grams of carbs.

This is the best non-dairy yogurt I’ve tried so far. It’s a very thick almost grainy yogurt, but it has a good yogurt flavor and I wasn’t in doubt that I was enjoying a blueberry yogurt. You can even see the blueberry seeds at the bottom of the glass jar.

Yep, you read that right, the yogurt comes in a cute little glass jar which makes it a little harder to mix, as the glass is fairly narrow, but also means that you can easily close the lid and put it back in the fridge if you don’t want to eat it all. And since it’s a very high-calorie yogurt (220 calories per 5 oz serving), you might only want to eat parts for it in a single serving.

It’s a coconut-based yogurt and it’s sweetened with maple syrup, which unfortunately is fairly high glycemic, so you’ll get 9 grams of sugar if you eat the whole portion. Nothing wrong with that, but you will most likely see a blood sugar impact, potentially delayed as a serving also has 19 grams of fat.

Another thing to consider is that the protein content is very low (2 grams) so this is not an optimal snack if you’re looking to boost your protein intake.

Siggis Icelandic Skyr, hit the shelves in the United States around 2015 and you can now find it in most well-stocked supermarkets. Its claim to fame is that it’s not only relatively low carb, it is also a very high protein product with 14 grams of protein per serving.

I find the yogurt a bit too firm and a bit on the sour side. Since it’s sweetened with cane sugar and they are trying to keep the carbs low, they probably didn’t add a lot of sugar.

Despite the Skyr being sweetened with cane sugar, I found the blood sugar impact to be fairly mild. I do have to inject insulin to not see a blood sugar impact, which is to be expected when I eat 9 grams of carb, but with insulin, I didn’t see a spike in my blood sugars.

I really enjoyed eating this yogurt. It has a great creamy consistency and I wasn’t in doubt that I was eating a coconut flavored yogurt. It’s a fairly sweet yogurt which I enjoyed.

The yogurt is sweetened with fructose and also includes food starch leading to a relatively high sugar content (7 grams) compared to the other yogurts included in this review. After eating it, I did see a mild blood sugar impact, but no spike.

However, given the total net carbs of 9 grams and the 7 grams of sugar, I’d think most people managing their diabetes with insulin will need to dose for it.

What’s so great about yogurt: probiotics

One of the great health benefits of yogurt is that it is often filled with probiotics.

“Probiotics are live microorganisms that are intended to have health benefits,” explains the National Institute of Health.

Probiotics are a category of bacteria that are beneficial to your health. More specifically, when eaten, probiotics contribute to the community of beneficial bacteria in your gut that affects many aspects of your health.

Probiotics affect nearly every part of your health

More and more research continues to prove that the microbiome of bacteria in your gut plays a critical role in your overall health — including your diabetes.

Consuming a variety of foods containing different types of probiotics can not only help but is also critical after being prescribed antibiotics. Antibiotics kill off all the bacteria in your gut — the good and the bad — and replenishing the good bacteria by eating sources of probiotics should be part of every antibiotic prescription.

Before you leave to shop for low-carb yogurt, you should also take a look at my other low-carb product reviews:

Let me know if you don’t see your favorite low-carb yogurt on the list and I’ll add it (after trying it myself). I am always looking for great low-carb and diabetes-friendly products.