Home » Diet » The Best Sweeteners for People with Diabetes 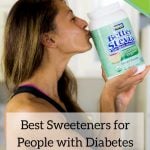 I get a little frustrated when reading or hearing outright incorrect claims and marketing spin about how some of the natural and artificial sweeteners affect your blood sugar.

As a person with diabetes, I want to know exactly what will happen to my blood sugar when I eat or drink something, and I don’t take kindly to half-true marketing claims.

I’ve decided to focus on which natural and artificial sweeteners are good for people with diabetes as it relates to impact on blood sugar, rather than on whether they are healthy choices in general since I think that is somewhat out of my domain and because plenty of others have already covered that.

What are natural & artificial sweeteners?

The FDA defines sweeteners as: “…commonly used as sugar substitutes or sugar alternatives because they are many times sweeter than sugar but contribute only a few or no calories when added to foods”.

This means that regular sugar, honey, and Agave nectar/syrup don’t fall into the sweetener category. However, I do want to address these quickly before moving on to the real natural and artificial sweeteners, since I’ve seen claims of how honey and agave won’t impact blood sugar in the same way as sugar.

Sugar substitutes that are NOT blood sugar friendly

Let’s start with honey because, let’s face it, it’s sugar in liquid form (82% of honey is sugar, the rest is water and small amounts of pollen, etc.).

It’s delicious, but a 2015 study in the Journal of Nutrition found that when subjects were given honey, cane sugar, or high-fructose corn syrup, they saw no notable difference in blood sugar increase.

The only benefit of honey over regular table sugar from a blood sugar perspective is that honey is slightly sweeter so you can use a little bit less of it and achieve the same sweetness. But that still doesn’t make it a good option for people with diabetes!

I think that the corporate marketing machine has been very clever when declaring agave nectar is a health food, for as Dr. Jonny Bowden points out“..It’s basically high-fructose corn syrup masquerading as healthy food.”

Agave nectar may have a lower glycemic index than sugar or honey, but it’s still up to 90 percent liquid fructose.

At the end of the day, sugar is sugar. Honey or agave nectar may be slightly better for you than pure white sugar from an overall nutrition perspective, but don’t get tricked into thinking that they are blood sugar-friendly alternatives.

None of the natural and artificial sweeteners I list below will affect your blood sugar in their raw form, but you have to make sure that the manufacturer hasn’t added anything else to the product such as fillers or flavors.

With the exception of aspartame, none of the sweeteners can actually be broken down by the body, which is why they won’t affect your blood sugar. Instead, they’ll pass through your systems without being digested, so they provide no extra calories.

New natural low-calorie and low-carb sweeteners have come to market in recent years, which is exciting if you’re looking to reduce your carb intake but still enjoy something sweet.

So, what is Stevia? Stevia is a completely natural sweetener since it’s simply an extract from the leaves of the plant species Stevia Rebaudiana. Most grocery stores carry it and you can purchase it as a powder, extract, or flavored drops.

In its purest processed form, Stevia is about 300 times sweeter than regular table sugar but the products available on the market have varying degrees of sweetness so it’s important to know the sweetness of the product you use.

Stevia powder: I used to buy the standard supermarket brand Stevia powder until I realized that they mix it with fillers (primarily dextrose) to make it behave more like sugar. This actually has some calorie impact as well as a minimal effect on your blood sugar if you use large amounts.

The nutritional label will claim that it’s a zero-calorie food, but that’s only because the FDA allows all food with less than 0.5 g sugar per serving to be categorized as having zero calories.

All that being said, I do still use powdered Stevia as a sugar replacement for baking as it reacts well to heat. If you use a brand like Stevia in the Raw, it substitutes one-for-one to sugar and I just acknowledge that it might have a minimal/neglectable impact on blood sugars.

Stevia extract: In general, I recommend buying Stevia extract instead of powdered stevia because it’s pure Stevia with nothing added.

The extract has a more intense flavor but you’ll get the sweetness without any calories or blood sugar impact whatsoever. To me, that’s a winner if you want a natural sweetener to sweeten up your morning coffee or oatmeal. I use the NOW brand Stevia Extract.

Flavored Stevia drops: If you have a hard time drinking enough water (or just think plain water is boring), you have to try Sweet Leaf’s Liquid Stevia Drops. You simply squirt a few drops into your water and it tastes like lemonade, but without the blood sugar impact.

Monk fruit is another good choice for people with diabetes since it’s a natural sweetener that won’t affect your blood sugar.

I’ve tried it, but it’s not a product I really use simply because I prefer the taste of Stevia (monk fruit has a slightly fruity aftertaste). But that’s a personal preference, many people really like monk fruit.

It’s a good alternative if you are looking for a natural sweetener but don’t like the taste of Stevia.

Always carefully read the nutrition label when buying monk fruit extract as some brands combine the monk fruit with sweeteners like Erythritol or even sugar and molasses. I recommend the brand Monk Fruit in the Raw.

Allulose is a simple sugar (monosaccharide) and should not affect blood sugars as it’s not metabolized by the body.

It’s a naturally occurring sweetener and can be found in small quantities in different foods such as maple syrup, brown sugar, wheat, and fruits (e.g., raisins, dried figs). However, whereas those foods will impact blood sugars and add calories to what you eat or drink, allulose won’t and is nearly calorie-free.

Allulose is 70% as sweet as regular sugar so you need to use slightly more if you are replacing regular sugar in a recipe or if you’re just sweetening your tea or coffee.

The FDA has reviewed allulose and determined that it’s a very low-calorie sweetener (i.e., no more than 0.4 kcal/g). The carbs in allulose are included on the nutrition label of foods that contain allulose (in contrast to many other low-carb sweeteners where the carbs aren’t included) but that is only because the FDA determines carb counts based on chemical markup rather than blood sugar impact.

What’s exciting about allulose, and what sets it apart from other natural sweeteners, is that clinical studies have shown that it can potentially help with blood sugar management. The studies were very small, but they showed that when people not living with diabetes as well as people living with pre-diabetes ate allulose together with carbohydrates, the blood sugar impact wasn’t as big as when allulose wasn’t included.

The list below covers the FDA-approved artificial sweeteners and their brand names.

None of them should affect your blood sugar but there is a lot of controversy about whether or not they have long-term health implications. I won’t go into that in this post, but my personal preference is to stick to the natural stuff. I mean, if it pretty much tastes the same, why take the chance?

Other sweeteners, which are often used in diet foods, food labeled as “sugar-free”, and sugar-free gum, are sugar alcohols.

Per the American Society for Nutrition: “Sugar alcohols are slightly lower in calories than sugar and do not promote tooth decay or cause a sudden increase in blood glucose.”

The most common sugar alcohols are Maltitol, Sorbitol, Xylitol, Erythritol, and Isomalt (that’s a lot of names to remember, so I generally just categorize them as the ‘ols’).

They do indeed affect your blood sugar less than regular sugar, but their main problem is that they also work as laxatives. This means that they most likely will give you gas or cause bloating. I can eat some of them in small amounts but my body reacts badly to Xylitol.

Sugar alcohols give you about 2.5 calories/gram versus 4 calories/gram for regular sugar so if you can stomach them (pun intended), you can reduce the blood sugar impact by 50% by using any of these sweeteners. To me, this is not really worth the potential health issues and side effects.

So what are the best sweeteners for people with diabetes?

In general, there is no reason not to choose one of the natural sweeteners that don’t affect blood sugar – Stevia, monk fruit, or allulose. They are all great for people with diabetes and you can choose whichever one you think tastes the best. For baking, Stevia in the Raw is my preferred sweetener as it retains its taste and acts the most like sugar when heated.

Artificial sweeteners and sugar alcohols are not terrible, but they do potentially have side effects, the most common of which is digestive issues. I, therefore, see no reason to use them when natural and safe alternatives are available.

Sugar substitutes such as honey and agave nectar are essentially identical to normal sugar when it comes to blood sugar impact. I do keep both sugar and honey in the house for the rare occasions where I want to bake something really decadent (like a birthday cake), but I try to use it as little as possible.