Home » Diet » Diabetes and Sugar Alcohols: What You Need to Know

If you’ve experienced even one Valentine’s Day or Christmas since you were diagnosed with diabetes then you’ve likely eaten a few of those “Sugar-Free Russell Stover’s” chocolates. They are sweetened primarily with “sugar alcohols” with more than 7 or 8 grams in each individual chocolate.

But sugar alcohols aren’t always a harmless replacement for sugar. And there’s more than one type.

In this article, we’ll look at what sugar alcohols are made from, how they do or don’t impact your blood sugar, and the side-effects of eating too much of anything containing sugar alcohols.

For a guide to natural sweeteners, read The Best Sweeteners for People with Diabetes. 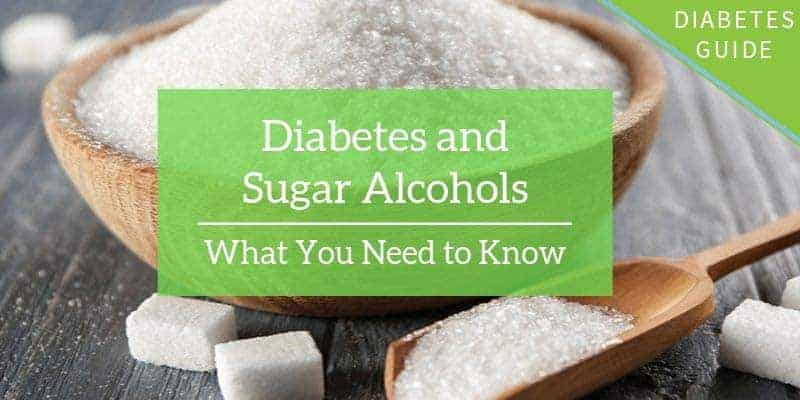 What are sugar alcohols?

Sugar alcohols aren’t actually sugar or alcohol, according to the International Food Information Council Foundation (IFICF). Instead, they are actually a type of carbohydrate whose chemical structure is similar to both sugar and alcohol.

The potential benefit of sugar alcohols for a person with diabetes is that they are not fully absorbed and digested by the body, which means you get the sweet flavor without the full serving of eventual glucose in your bloodstream.

While they all taste “sweet,” they don’t taste identical to sugar. Some have a more metallic, chemical, or iron-like taste.

You can determine if a food contains sugar alcohols by looking at the nutrition panel — it will be listed under “Total carbohydrate” as “Sugar alcohols” or more specifically by the exact type of sugar alcohol. And by reading the list of ingredients to identify exactly what sugar alcohol was used.

However, not all sugar alcohols are created equal. Let’s take a look at the different types.

The sugar alcohols you’ve probably seen on older packaged “sugar-free” foods include sorbitol and maltitol, but there are many different kinds.

How do sugar alcohols impact your blood sugar?

The impact of sugar alcohols on your blood sugar varies tremendously depending on which one you’re consuming. (Read the ingredients list and the nutrition panel to determine which one is in what you’re eating!)

This means that sugar alcohols containing 3 calories per gram can affect your blood sugar nearly as much as regular ol’ white sugar.

Erythritol contains nearly zero calories per gram and has become very popular in ketogenic and low-carb baking as a result.

Isomalt also contains essentially zero calories per gram and is used in many packaged “sugar-free” foods.

Sorbitol, maltitol, and hydrogenated starch hydrolysates, on the other hand, contain nearly 3 calories per gram. These are both commonly used in “sugar-free” chocolate, candy, and other packaged foods.

The number of grams of these sugar alcohols listed on the nutrition label won’t impact your blood sugar as much as the same amount in white sugar, but they will raise your blood sugar some.

The best way to find out how much is to check your blood sugar often after consuming anything containing sugar alcohol as its primary sweetener.

Make a note of how much insulin you took to cover the carbohydrates listed on the nutrition label and/or how your blood sugar reacted during and after the first 2 hours of eating it.

Safety and side-effects of sugar alcohols

The side-effects of eating sugar alcohols are referred to as “frequency-based adverse effects,” which means that eating too much in one day or eating them too often throughout a single week can lead to some uncomfortable symptoms.

The symptoms could last for an entire day while your digestive system is working the sugar alcohols out of your system.

Some people find that the longer they continue to consume foods containing sugar alcohols, the fewer uncomfortable digestive symptoms they experience.

The Academy of Nutrition & Dietetics recommends consuming no more than 50 grams of sorbitol in one day. Sorbitol is one of the harsher sugar alcohols on your digestive system.

While there aren’t specific recommendations for every type of sugar alcohol, a limit of 50 grams is a wise quantity to apply across the board.

Should you include sugar alcohols in your diet as a person with diabetes?

This is a very personal decision. For some, baking with erythritol is what makes them feel good about enjoying desserts, and helps them achieve their blood sugar goals without feeling deprived.

For others, sugar substitutes aren’t worth the digestive troubles, the funky aftertaste, or the overall feeling of eating a “fake” version of the real thing.

Of course, give sugar alcohols a try! You can’t know if they’re a good fit for you and your diabetes goals until you try them.

If you found this guide to sugar alcohols and diabetes useful, please sign up for our newsletter (and get a free chapter from the Fit With Diabetes eBook) using the form below. We send out a weekly newsletter with the latest posts and recipes from Diabetes Strong.