While “going gluten-free” is a bit of a fad these days, there can be good reasons for doing so — especially if you live with type 1 or type 2 diabetes.

Could following a gluten-free diet improve your insulin sensitivity? Could it help you lose weight, feel more energized, improve your thyroid function, and eliminate your stomach woes?

Let’s look at what the science says!

In this article, we’ll look at what gluten is, the signs and symptoms of gluten intolerance or sensitivity, and what research says about gluten and diabetes. 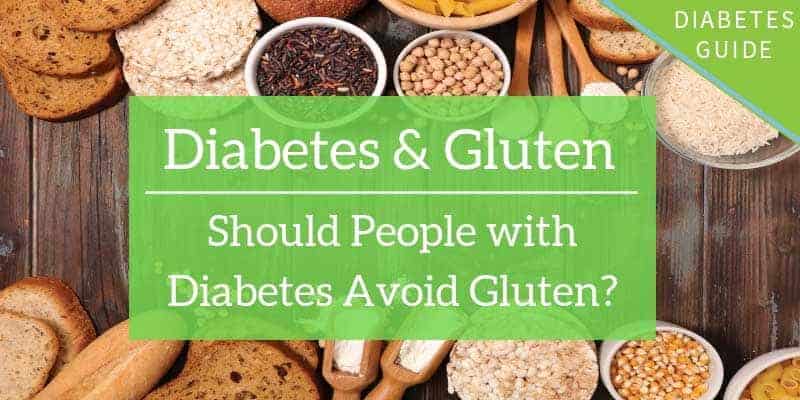 Gluten is the protein found in many types of grain, including wheat, rye, Spelt, barley, semolina, farro, durum, bulgur, and Kamut.

The two primary types of protein in gluten are glutenin and gliadin. It’s believed that gliadin is the protein that creates the most troublesome symptoms in those who don’t tolerate gluten well.

Gluten is really what gives your favorite bread products that stretchy, elastic consistency, and delicious flavor. (A flavor you may not even be aware of until you try eating gluten-free bread.)

Trying to replace gluten with a gluten-free grain (corn, rice, buckwheat, etc.) will always be tricky because, without gluten, you lose many of the qualities that make baked goods and other starch-based foods so delicious!

What is gluten intolerance (celiac disease)

There are actually two types of health conditions based on the body’s reaction to gluten: gluten intolerance and gluten sensitivity.

Let’s take a look at the differences between the two, and their signs and symptoms.

Celiac disease — gluten intolerance — is an autoimmune disease like type 1 diabetes, in which the presence of gluten triggers the body’s immune system to attack and destroy the lining of the small intestine.

Celiac disease can be identified and diagnosed with a simple blood test or a biopsy of the small intestine, which is simpler than it sounds. While sedated fully, a gastroenterologist will insert a long, thin device down your throat and scratch a small piece of tissue from your small intestine to then examine with a microscope for damage.

Note: do not stop eating gluten before your blood test or biopsy. If you remove gluten from your diet before either of these tests, the inflammation and antibodies that result from the celiac disease could diminish and produce inaccurate results.

If your blood test or the biopsy comes back negative, that should lead you to then eliminating gluten for 2 to 3 weeks to determine if you have a sensitivity to gluten rather than intolerance.

You may only experience a handful of these symptoms — or you may have nearly none at all. In celiac disease, the lining of the small intestines and the body’s overall inflammation levels are gradually increasing. The longer you continue to consume gluten, the strong the symptoms will usually become.

What is gluten sensitivity

Gluten sensitivity is more like an allergy: your body reacts negatively when you consume gluten.

It’s often assumed that the most significant symptom of gluten intolerance or sensitivity is an upset stomach, but gluten can wreak havoc on your mood, your joints, your energy, and your skin, too.

Keep in mind, however, that gluten has been associated with a variety of other symptoms because it can affect every person differently.

In fact, people with gluten sensitivity may not have any symptoms in their gut.

Like Celiac disease, you certainly don’t have to have all of these symptoms to qualify. The easiest way to know if gluten is bothering you?

If you feel better after quitting gluten, and then you reintroduce gluten after 2 to 4 weeks of avoiding it and your symptoms return, you can essentially determine that your body has a sensitivity to gluten.

Can gluten be harmful to people who aren’t gluten intolerant or sensitive?

This is a question that hasn’t been conclusively answered by science at this point, with various studies and anecdotal evidence pointing in different directions.

What we present below are the most compelling reasons for and against eating gluten, but please take these opinions and studies for what they are: early-stage scientific findings and indicators of possible negative effects — not conclusive evidence that eating gluten is harmful to everybody!

The case against gluten

You’ve probably asked the question, “If we’ve been eating gluten for thousands of years, how could it possibly start making everyone sick now?”

The answer is complicated.

But it starts with this: gluten is suspected of creating inflammation and “intestinal permeability” in everyone, explains Dr. Tom O’Brien — an expert in celiac disease, gluten sensitivity, and gut health.

What is “intestinal permeability”?

Intestinal permeability is also known as a “leaky gut.”

This lining of your gut prevents against loss of water and electrolytes. It’s also supposed to prevent the entry of antigens and microorganisms.

“The gateway is through a leaky gut,” O’Brien explains. “So, if you’re eating the type of grains that activate intestinal permeability, you’re opening the gateway. The fastest growing cells in the body are inside the lining of the stomach and intestine. Every 3 to 4 days, you have a new stomach lining.”

O’Brien says that every time you eat gluten, you are creating tears in the lining of your gut, but the gut is designed to heal quickly — until it starts struggling to heal.

According to a study from Harvard, O’Brien said gluten may actually be toxic for all humans. The study looked at four groups: people with Celiac, people with gluten sensitivity, people on a gluten-free diet, and people who still eat gluten.

The study found that all four groups presented with intestinal permeability after eating gluten.

Can gluten lead to inflammation?

He adds that the inflammation from a daily diet of eating gluten can affect whatever happens to be the most vulnerable part of your own health — often something you may not even be aware of.

“Maybe it’s your kids or your brain,” said O’Brien. “Gluten is gasoline on the fire of inflammation. It roars up throughout the body and wherever the weak link is, that’s where it will blow up.”

“Another study focused on Attention Deficit Disorder (ADD),” explained O’Brien. “132 kids were tested and all of them improved in all 12 markers in six months on a gluten-free diet. Their brain was the weak link [that gluten was affecting].”

It’s an overwhelming idea — that everyone is sensitive to gluten — but considering the amount of gluten in today’s heavily processed food — 50 percent more according to O’Brien — it’s not as far-fetched as it may feel.

The case for gluten

While the information presented by Dr. O’Brien sounds like a convincing reason to exclude gluten from your diet, other experts and researchers don’t agree that gluten is harmful to people who don’t suffer from celiac disease or gluten sensitivity.

A 2018 study by the Division of Gastroenterology at the University of South Alabama School of Medicine found that:

“High-quality evidence supporting gluten avoidance for physical symptoms or diseases other than those specifically known to be caused by immune-mediated responses to gluten is neither robust nor convincing. In fact, gluten avoidance may be associated with adverse effects in patients without proven gluten-related diseases.”

According to the study, the main risk for people who avoid gluten without a medical reason is a deficiency in key minerals and nutrients, including iron, folate (vitamin B), calcium, and fiber caused by a restrictive diet.

The average American diet is already low in fiber in particular, and when you remove whole wheat, the problem gets even worse.

Of course, these deficiencies can be overcome if you pay careful attention to what you eat and do your research before starting a gluten-free diet. In fact, some argue that the very act of researching everything you eat to make sure it’s gluten-free makes you more likely to make healthy food choices in general.

Research on gluten and diabetes

This 2015 study from Baltimore and Boston determined that celiac disease occurs in as much as 20 percent of people with type 1 diabetes.

Additionally, it determined that type 1 diabetes generally develops first. In patients in which the celiac disease developed first, the onset of their type 1 diabetes was notably later in life than average.

The same study from Baltimore and Boston also found that celiac disease and type 1 diabetes have several overlapping genetic risk factors. The HLA-DQ2 and DQ8 genes have both been pinpointed as significant determinants of developing either disease.

This 2018 study from Denmark found that women with the highest gluten consumption during pregnancy significantly increased the risk of type 1 diabetes in their child, essentially doubling the risk.

This 2015 study from Sweden and Denmark found that gluten actually prevents leptin from binding to its leptin receptor. Leptin is a protein produced by the body that regulates appetite and dietary intake. Leptin is also directly linked with the obesity gene.

When leptin is unable to properly bind with the leptin receptor, it’s referred to as “leptin resistance” which is considered a major risk factor for obesity.

“It has been hypothesized that dietary cereal grain protein could cause leptin resistance by preventing leptin from binding to its receptor,” explained the study.

This 2017 study from New Jersey followed 155 patients without celiac disease or cardiovascular disease who also followed a gluten-free diet.

While the study did find that gluten-free eaters tended to have healthier weights and higher HDL cholesterol levels, they could not conclude that a gluten-free diet actually reduced a patient’s risk of metabolic syndrome (which includes type 2 diabetes) or cardiovascular disease.

If you suspect that you are intolerant or sensitive to gluten, or struggle with digestive issues, having a blood test and/or biopsy done can be a good idea. If the test comes back positive for celiac disease, you can adjust your diet to eliminate gluten.

If the tests come back negative, you can still consider eliminating gluten from your diet for a period of at least two weeks to see how that affects your health and overall wellbeing. If you see a positive effect, you will then have to decide if it’s worth adopting a gluten-free lifestyle.

Living a gluten-free lifestyle is easier said than done. If you believe you may be negatively affected by gluten, first talk to your healthcare team.

And remember, if you have a blood test done to determine if you have celiac disease, you’ll want to make sure you are eating gluten prior to the test.

Suggested next post: Bloating, Constipation, and Diabetes: How I Fixed My Stomach Problems

If you found this guide to diabetes and gluten helpful, please sign up for our newsletter (and get a sign-up bonus) in the form below. We send out a weekly newsletter with the latest posts and recipes from Diabetes Strong.