Ah, that alluring smell of newly brewed coffee can make any coffee drinker yearn for a cup! But have you also noticed that sometimes (or maybe every time), your coffee and diabetes doesn’t seem to agree?

You might see your blood sugar shoot up after that first cup of coffee in the morning or maybe you find that you need extra insulin for your meal when you have a coffee on the side. And maybe that’s making you question; should or can people with diabetes have coffee?

In this post, I will explain everything you need to know about caffeinated beverages: How it impacts blood sugar, its effect on insulin sensitivity, and if coffee is good for people with diabetes. 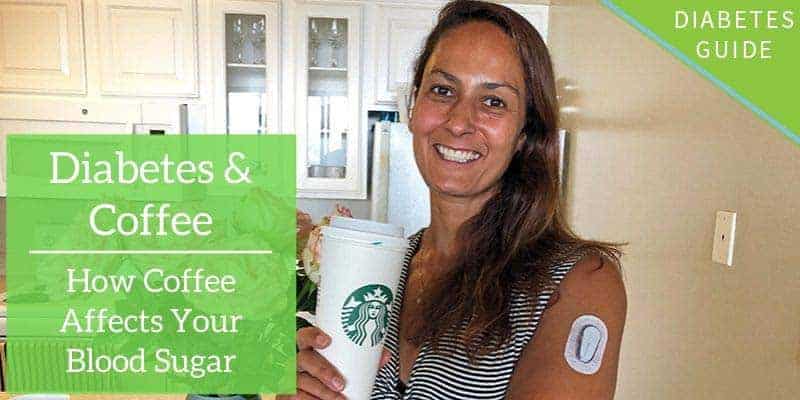 How does caffeine work?

We often talk about caffeine and drinks like coffee, RedBull, tea, and Coke as though we simply consume caffeine and suddenly you have energy. The way caffeine boosts your energy is actually much more complex than that!

Adenosine receptors (AR) normally work in your body to actually slow things down. Scientifically speaking, AR binds to your cells and slows down cell activity. This helps you fall asleep at bedtime, for example, or helps your body calm down and recover after intense activity, too.

When you drink caffeine, it actually blocks AR from binding to your cells which enables your cell activity to stay high, giving you more energy and preventing you from falling asleep.

The presence of caffeine also tells your brain to produce more serotonin, dopamine, and acetylcholine.

These are neurotransmitters which essentially help your brain cells communicate. Serotonin, dopamine, and acetylcholine are classified as “neuromodulators” that help regulate your body’s physiological response to activity.

Dopamine and serotonin both have a very positive “rewarding” effect on the brain. An increase in dopamine production, for instance, can occur during a first kiss. It has a pleasing, exciting, giddy-like impact on your brain.

Acetylcholine influences how excited you might feel about something, but it also has a big impact on things unrelated to mood, like muscle function.

One of those hormones is adrenaline — and this is exactly why and how caffeine can spike your blood sugar. Let’s take a closer look.

How much caffeine is in coffee, tea, etc.?

The answer to this question is complicated because different sources of coffee, for example, contain different amounts of caffeine. The darker the roast, for example, can significantly change the caffeine content.

A cup of coffee from Starbucks vs. Dunkin’ Donuts will offer vastly different caffeine quantities.

Use this easy “Caffeine Chart” to get a better idea of how much caffeine you’re consuming.

How coffee affects your blood sugar

Okay, so those catecholamines described above include the production of adrenaline (also known as “epinephrine”).

Adrenaline is known as the “flight or fight” hormone. It helps your body endure intense stress — good or bad — like a competition, a rollercoaster ride or a car accident.

Adrenaline helps you endure that stressful event by telling your liver to release stored energy…glucose!

Your liver has stores of glucose, known as glycogen, that it releases at different times every single day. That glycogen is then broken down and converted into glucose to give your body fuel.

During everyday life, your liver is releasing tiny amounts of glycogen between meals to give your brain that second-by-second delivery of glucose it needs in order to function.

And that is how caffeine spikes your blood sugar.

Note: Coffee consumption, especially in the evening, can also decrease sleep quality for some people, which is a known course of decreased insulin sensitivity.

A study consisting of 10 people with type 2 diabetes set out to determine the impact of regular caffeine consumption on overall insulin levels.

All participants were regular coffee drinkers, consuming about 4 cups of coffee per day, but they all stopped drinking coffee during the study. Then half of them were given capsules containing 250 mg of caffeine, and the other half were given placebo pills containing zero caffeine.

The result, according to the study: “On the days the patients took caffeine, their blood sugar levels were 8% higher. And after every meal — including dinner — their blood sugar spiked higher than it did on the day they had no caffeine.”

Does this mean people with diabetes shouldn’t drink coffee and other caffeinated beverages? Not necessarily. It means we should look closely at our caffeine consumption and moderate it just like we would with other things that impact our blood sugar levels.

Just because black coffee and green tea contain zero calories doesn’t mean we should drink them without limits. Instead, caffeine should ideally be something we consume carefully and set personal limits around for the sake of our overall diabetes health.

Managing your blood sugar around coffee and other caffeinated beverages

In general, you’d have to consume around 200 mg of caffeine to see a blood sugar impact. That’s about 1-2 cups of regular black coffee or 3-4 cups of black tea

However, we are all different and some of us may see a blood sugar impact from just a single cup of coffee while others may be able to drink several cups without any blood sugar changes.

It’s also important to notice whether the time of day you drink caffeine or coffee changes the impact, too.

What are you adding to your coffee?

Even though those flavored creamers are a mere tablespoon of liquid, they are very high in sugar. Enough sugar to definitely cause an even larger spike in your blood sugar.

One of the most useful things you could do for yourself as a coffee drinker with diabetes is to gradually adjust your tastebuds to appreciate the taste of black coffee.

Try removing the sweetener and milk from your coffee for two weeks. Just two weeks! And see how you start to like the taste of black coffee! You might be surprised to find that you eventually find sweetened coffee to taste overwhelmingly sweet.

Using the spike from coffee to prevent lows…

If you tend to go low during or after exercising, you can use coffee as a way to limit that risk

Drink a cup of coffee about an hour before an intense cardio workout, for example, could prevent low blood sugars without requiring you to eat food, calories, carbs, etc. But remember not all types of exercise drives blood sugar down so you want to combine the coffee with the right type of exercise.

Do you need more insulin for coffee?

Many people simply find they need 1 unit of fast-acting insulin with a cup of coffee.

Or you could test your body’s response to coffee by removing coffee from your morning routine for a few days. Did your insulin needs drop? Were your blood sugars easier to manage? If so, that doesn’t mean you can’t go back to drinking coffee, but it does tell you that you need insulin to help your body deal with the effects of coffee.

It also tells you that limiting your coffee intake is likely a good idea!

You could always switch to decaf!

Caffeine is, of course, an addicting thing. Quitting a coffee habit means enduring pretty intense withdrawal headaches for at least a week or two.

But if you’d like to remove this caffeine variable from your diabetes management, you could always switch to decaf coffee.

There is a little bit of caffeine in decaf coffee but likely not enough to impact your blood sugar.

Either way, it’s all about balance — like everything else in life with diabetes!

Side effects of drinking coffee

While coffee is safe to drink for almost everyone, it does have potential side effects that can be more or less severe depending on the individual:

For some, regular coffee drinking can also cause digestive issues.

In extremely rare cases, high doses of caffeine can induce psychotic and manic symptoms. People with panic disorder and performance social anxiety disorder should, therefore, be careful when consuming caffeine.

Q: How many cups of coffee can I safely drink per day?

A: There is no absolute standard for this but a general recommendation is to limit caffeine consumption to 400 milligrams per day. That equals about 4 cups of coffee.

If your sleep, mood, or insulin sensitivity is being impacted by the amount of coffee you drink, limiting your intake is advised. It’s also always a good idea to limit or avoid both natural and artificial sweeteners if possible.

A: Even though coffee generally increases insulin resistance (which is thought to be an important factor in developing type 2 diabetes), a 2014 study by researches from Harward who followed more than 100,000 coffee drinkers for 20 years found that people who increased their coffee intake by over one cup per day had an 11 percent lower risk of developing type 2 diabetes.

Also, people who reduced their coffee intake by one cup per day increased their risk of developing diabetes by 17 percent. There was no difference in those drinking tea.

If you found this guide to diabetes and coffee useful, please sign up for our newsletter (and get a free chapter from the Fit With Diabetes eBook) using the form below. We send out a weekly newsletter with the latest posts and recipes from Diabetes Strong.