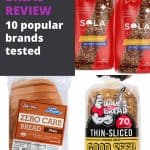 Most people, myself included, like bread. There’s just something incredibly satisfying about eating a good piece of bread, and who doesn’t love a good sandwich or burger?

Even if you’re living with diabetes (or just watch your carb intake), you can still eat bread. In the last few years, dozens of low-carb bread options have become available in grocery stores or online.

In this article, I’ll review 10 of the most popular and widely available brands.

How low-carb bread is made

Low-carb bread is typically made with a lot of dietary fiber (which is indigestible and doesn’t affect blood sugars) and/or nut flours (which are higher in fat but lower in carbs than regular flour).

This means that you shouldn’t expect low-carb bread to exactly match regular bread in taste and texture.

How I ranked the different brands

The brands included all have less than 12 grams of net carbs per serving.

I have given each brand a score from 1-5 based on:

These are of course subjective measures, but I hope this review will still give you get a good idea of which brands are good and which have room for improvement.

I have listed the brands based on the net carbs per serving, from lowest to highest.

At first sight, this looks like regular white bread but the slices are small, and once toasted, it takes on the texture and taste of cardboard. I really did not enjoy this bread at all.

The only reason why I am giving it two and a half stars is that it’s very low calorie and has zero net carbs. But I’d rather eat a few extra calories and carbs and actually enjoy the bread. I would not buy this brand again.

The mixture of ingredients and the production facility set up also means that the bread is not suitable for people who have to avoid gluten, soy, peanuts, tree nuts, or dairy.

This is an almond-based bread which is why the net carbs are very low. It can be bought online or in select specialty stores (I found it at Whole Foods).

Because it’s almond flour based, the bread is very dense and tastes best when toasted, but it’s a pretty good plain sandwich bread. The slices are large and the almond base makes it very blood sugar friendly. I enjoyed eating it.

It’s manufactured in a glutenfree facility, so it’s suitable for most people who aren’t allergic to nuts, coconut flour, or eggs.

I came across this brand on Instagram and I like several of their baked to order products, including this Everything Bagel. (It’s not really a bagel though, the only bagel thing about it is the shape of the bread.)

The reason the carb count is so low is that the main ingredients are almond flour, eggs, and oil. This also means that the bagel will sizzle when you toast it due to the high fat content.

Because it’s more fat than carbs, I hardly see a blood sugar impact when I eat this. Overall, this was one of the best low-carb breads I tested.

This bread is gluten, soy, and dairy-free but is seasoned with garlic and onion which might not be suitable for people with FODMAP intolerance.

One could argue whether or not these biscuits qualify as bread, but I happily put butter on them so I think they do.

They have the right buttery taste and slightly crumbly texture, and they are firm enough to slice but easily break apart in your hand, even when toasted.

Some people may find their taste a little bit bland, but I like them and they have no impact on my blood sugar.

The biscuits aren’t large (about 1.3 oz.) They are a high fiber bake and do not cater to people trying to avoid wheat, soy, peanuts, tree nuts, eggs, or dairy.

This is a decent low-carb sliced bread. It’s very soft, and it tastes, smells, and toasts like regular bread.

The main reason I’m not giving this bread a higher score is that the slices are on the smaller side and a serving is not very filling. Even if you enjoyed two slices (6 grams of net carbs total), I still don’t think they are as filling as the Sola Hamburger Buns.

It is, however, a true low-carb bread and it hardly impacts my blood sugars at all.

It’s made with large amounts of fiber to keep the net carb count down. The bread is also made with wheat, soy, dairy, and egg so it’s not a good option if you look to stay clear of those ingredients.

I really liked the taste, texture, and size of a slice of this bread. It’s has a slightly nutty flavor and the only reason I don’t give it a 5-star score is that it did seem to impact my blood sugar somewhat (probably because it contains a small amount of molasses.)

One of the positives of this bread, aside from the great taste, is that I found it at my local grocery store as well as online so it’s easy to get your hands on.

The main ingredients in this bread are potato flour and other wheat flours, so it’s gluten-free, which can make it a good option for those looking to avoid gluten.

This is, in my opinion, one of the best low carb breads available. Each bun is the size of a regular hamburger bun and they have a light and fluffy texture. And most importantly, they taste like a wheat bun.

I like to toast my bread and this bread toast beautifully without melting or turning to cardboard.

A bun is 140 calories and those come from different fibers, fat, milk, and dairy sources. So although low in carbs, the bread is not suitable for anyone who doesn’t eat gluten, soy, dairy, or eggs.

Nature’s Harvest is another bread you’ll see on the shelves in most grocery stores. It’s baked by a large commercial bakery that also bakes other popular brands such as Thomas muffins and SaraLee bread.

There’s absolutely nothing wrong with that and the Nature’s harvest loaf did live up to my expectations of what sandwich bread should look and feel like. But like Dave’s Killer bread (see below), I did find the bread to be a little too sweet for my taste.

Be aware that a serving is 2 slices rather than just one. They have been good enough to list the carb content for both 1 and 2 slices on the packaging so it’s easy enough to figure out how many carbs you’re consuming (The 7 g net carbs listed is for one slice).

It’s a wheat-based bread and it’s baked with soy so it’s not a good choice for those looking to avoid gluten or soy.

Dave’s Killer Bread is another brand you’ll see on most supermarket shelves, at least if you’re in California. It’s supposedly the most sold organic bread in the US.

I choose the Good Seed Thin-sliced bread for this review simply because it was the one with the lowest net-carb count my local store had available.

It definitely looks and feels like any ordinary slice of sandwich bread but I thought the slices were a little on the small size. I also found the taste a little too sweet and it hit my blood sugar pretty hard, which just didn’t work for me, so I don’t see myself buying this again.

It’s a wheat and seed bread and also has a few grams of added sugar (which might explain why I find it sweet) so it won’t work for those looking to avoid gluten.

This is not the bread with the lowest carb count but it has been a staple of mine for years. It has a mild almost nutty flavor and it toats and smells just like a whole grain muffin.

It’s made completely out of sprouted grains without any flour so it has a lower glycemic index than regular bread (36 versus around 75 for most other breads). That means that it should give less of a blood sugar spike than regular bread as it gets converted into glucose in the bloodstream slower. However, I often notice a relatively steep blood sugar impact when I eat this bread.

The serving size is the only other thing that really bothers me about this bread, as a serving is only ½ a muffin.

The muffins are vegan but made with sprouted wheat and soy, so it’s not suitable for anyone trying to avoid that.

Let me know if you don’t see your favorite low-carb bread on the list and I’ll add it. The only requirement is that 1 serving or 1 slice of bread should have no more than a maximum of 12 g net carbs.

I test a lot of low-carb products. Here are some of my other reviews: