Donating blood once or on a regular basis saves lives. Just one session of blood donation can impact many lives — but as a person with type 1 or type 2 diabetes, you may wonder: do they want my blood, too?

Does the American Red Cross want blood from a person with diabetes if their blood sugars aren’t perfect? If you have diabetes-related complications? If you have other conditions, like a thyroid disorder or Celiac disease or high cholesterol?

Let’s take a closer look at the rules and guidelines of blood donation for people with diabetes. 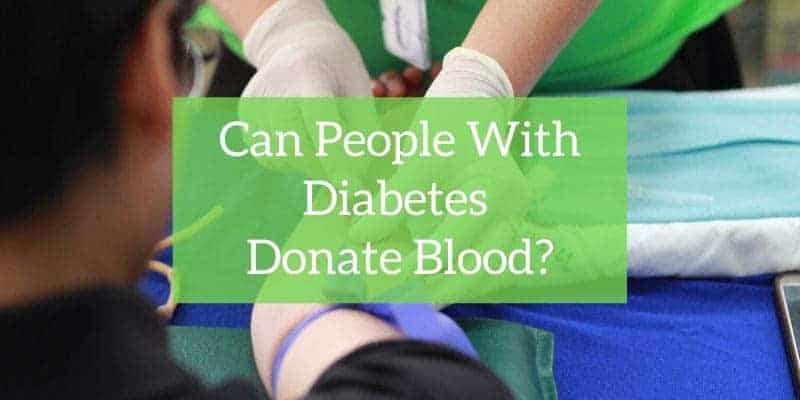 Regardless of diabetes, you absolutely cannot donate if…

…read more about these criteria from GiveaPint!

Eligibility requirements for people with diabetes

In general, people with diabetes can donate blood, but your blood sugar levels, in particular, do matter.

When you first arrive at the donation center, you’ll be taken through a screening process where honesty counts! There is no reason to lie during your screening process. Telling the truth about your blood sugar levels ensures that your blood has the potential to save lives.

If you live in the United Kingdom or Canada

Both Canada and the United Kingdom do not allow people taking insulin to donate blood.

This means anyone with type 1 diabetes cannot donate, but those with type 2 diabetes can as long as they do not require insulin for blood sugar management.

The American Red Cross does not list a specific A1c or blood sugar level requirement for those with diabetes to be eligible.

That being said, blood with higher levels of glucose simply doesn’t maintain its quality during the storage period compared to blood with a normal glucose level.

This doesn’t mean you need perfect blood sugar levels to donate, but if you’ve been struggling with diabetes management and your A1c is well above 9 percent, or your blood sugar is over 200 mg/dL at the time of donating, you may want to wait until you’ve been able to bring your blood sugars down into a healthier range.

You will not have to prove your A1c or even your current blood sugar level at the time of donating, so it’s really up to you to be honest, and let the American Red Cross professionals determine if you qualify during the screening process.

If you’ve ever taken “bovine” insulin

While today’s modern insulins are all acceptable, a specific type of older insulin will automatically exclude you.

“Donors with diabetes who since 1980, ever used bovine (beef) insulin made from cattle from the United Kingdom are not eligible to donate,” explains the American Red Cross.

The concern with bovine insulin is about a “CJD variant” and “mad cow” disease.

At this time, the only medication prescribed for diabetes management that prevents you from donating blood is Warfarin, which is actually intended to improve cholesterol levels but inadvertently improves blood sugar levels for some patients, too.

During your screening process, be sure to list all the medications you take!

Diabetes complications on their own may not automatically exclude you, but it’s critical to discuss these complications during the screening process.

The largest concern here is whether or not donating blood may actually worsen or exacerbate your own health, so it’s important to disclose any and all complications regarding your eyes, extremities (fingers, toes, feet, etc.), kidneys, skin, and so on.

For example, if you are struggling with retinopathy, the stress and changes in blood pressure that may occur during and after the blood donation process could affect the safety and health of your eyes.

Discuss any and all health concerns with your healthcare team or American Red Cross professionals before donating.

Regardless of diabetes, there are several different types of blood donation, and each type comes with different eligibility requirements, explained in detail by the American Red Cross:

A “whole blood” donation is just as it sounds: donating whole blood rather than donating specific aspects of blood (like platelets, etc.). Your donation will include the red cells, white cells, platelets, and plasma.

This is the simplest and easiest approach to blood donation because it doesn’t require processing the blood to pull out specific details and then intravenously cycling the “leftovers” back into your arm.

A “power red” donation is much like donating whole blood, but a special machine actually pulls more blood cells from your blood. Then the machine returns the extra plasma and platelets back to you intravenous.

A “platelet” donation is more time-intensive than a “whole blood” donation, but it’s a powerful donation that changes lives for those who need extra platelets.

“Platelets are tiny cells in your blood that form clots and stop bleeding. For millions of Americans, they are essential to surviving and fighting cancer, chronic diseases, and traumatic injuries,” explains the American Red Cross.

“Every 15 seconds someone needs platelets. Platelets must be used within five days and new donors are needed every day.”

This type of donation wants just your plasma, which means your blood is drawn, processed through a machine to remove just the plasma, and the red cells and platelets are returned to you, with additional saline. Despite the details, it doesn’t take much longer than a “whole blood” donation.

Preparing for blood donation if you have diabetes

Before donating blood, you should try your best to:

After you donate blood

For patients with type 1 diabetes

Some patients with type 1 diabetes report higher blood sugar levels during the few days after donating blood. This could be related to hydration levels — since becoming dehydrated can easily raise your blood sugar.

This means it’s extra important that you drink plenty of water after donating blood as a person with diabetes.

For patients with type 2 diabetes

Interestingly, recent research has found that people with diabetes who donate blood regularly see short and longterm improvements in their health.

“Heart attack, stroke and type II diabetes have all been shown to be less common in individuals that regularly donate blood,” explains research from the King Abdullah International Medical Research Center (KAIMRC).

“The improvement was particularly evident three weeks after donation. By three months, most of the tested biomarkers returned to their pre-donation levels.”

On the other hand, patients who donate blood shortly before an A1c test may have lower than accurate results, according to other research. Does this mean you shouldn’t donate? No — but it is something to keep in mind as you assess and manage your overall diabetes care.

Don’t let diabetes stop you from donating blood if you are otherwise healthy and the country you live in welcomes donations from those with diabetes!

If you found this guide to donating blood and diabetes useful, please sign up for our newsletter (and get a free chapter from the Fit With Diabetes eBook) using the form below. We send out a weekly newsletter with the latest posts and recipes from Diabetes Strong.