Home » Diabetes » Diabetes Medication » Metformin Side Effects: What You Need to Know

Metformin is one of the most prescribed drugs on the planet with over 120 million people taking it for diabetes management, but that doesn’t mean it’s the most popular.

Unfortunately, metformin also has one of the lowest “patient adherence” rates, because of its side effects which can appear within hours of taking your first dose. While there are actually many positive qualities about this drug compared to other diabetes medications, metformin side effects can be remarkably uncomfortable, disrupting your daily life.

In this article, we’ll look at how metformin works, the most common side effects, how to alleviate those side-effects, and why it’s the most prescribed despite causing so much discomfort for patients. 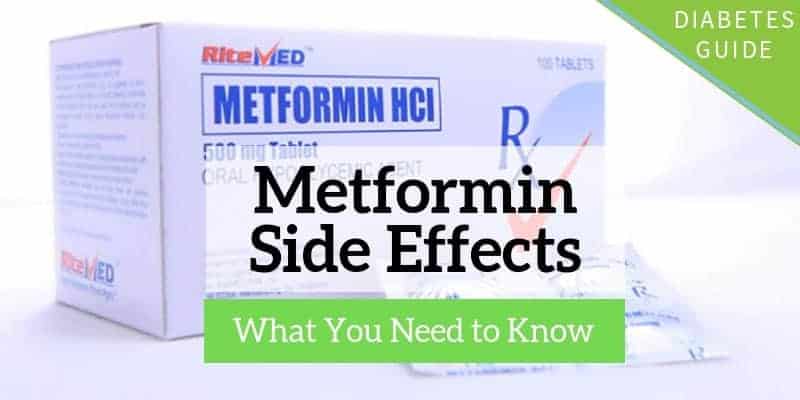 Metformin, also known under the brand name “Glucophage,” is an oral diabetes medication in the “biguanide” drug class, first introduced in 1957 to treat type 2 diabetes and improve blood sugar control.

It works by reducing the amount of sugar your liver releases throughout the day, and it increases your body’s sensitivity to insulin. It can also reduce the amount of glucose that is absorbed from the food you eat, which in turn reduces your blood sugar levels after eating.

Metformin is often considered the “first line of defense” for a patient newly diagnosed with type 2 diabetes, explains the American Diabetes Association.

The biggest benefit of metformin is the fact that it does not directly cause hypoglycemia; however when paired with other diabetes medications that do lower blood sugar, metformin could result in low blood sugar until those other medication doses are reduced to compensate.

Here are all of the known benefits of metformin:

The most appreciated quality of metformin is that it does not cause hypoglycemia in patients with type 2 diabetes who are not taking insulin injections, because it does not increase your insulin production like many other diabetes medications.

While it was designed for people with type 2 diabetes, people with type 1 diabetes struggling with severe insulin resistance can take it for, too. However, when used by patients taking it “off-label” for type 1 diabetes, it could lead to hypoglycemia because it would decrease your needs for insulin via injection or pump. This would be managed by working with your healthcare team to adjust your insulin doses.

Side effects of metformin

Let’s get back to that remarkably low “patient adherence” rate — the reason for this is not a mystery.

Unfortunately, metformin’s side effects — documented in the journal Diabetes, Obesity and Metabolism — usually appear quickly after your first dose and while they can improve for some after a few weeks, others may find they persist.

That being said, some patients may not experience uncomfortable side effects until they’ve been taking the drug for months or a year.

Why all patients taking metformin need B12 levels tested annually

Long-term use has shown in recent research to result in vitamin B12 deficiency for some patients. Left untreated, B12 deficiency can cause significant nerve damage, leading to a diagnosis of peripheral neuropathy.

If a doctor isn’t aware of this risk, they could misdiagnose the cause of a patient’s neuropathy as the result of high blood sugar levels when it may be the side-effect of metformin.

This nerve damage is irreversible, but further damage can be prevented by supplementing with a regular dose of vitamin B12. All patients taking metformin should have B12 levels tested annually. Any patient with inadequate levels should be placed on a B12 supplement immediately.

Can metformin cause lactic acidosis?

There have been a significant number of studies on metformin’s risk of inducing lactic acidosis — a state in which lactic acid builds up in the body, which can be fatal. But the greater majority of studies concluded without any cases of lactic acidosis according to “The Phantom of Lactic Acidosis due to Metformin in Patients With Diabetes” in the American Diabetes Association’s (ADA) Diabetes Care journal.

The risk of metformin causing lactic acidosis is actually so rare that the ADA says the risk is zero.

“The number of documented cases of metformin-associated lactic acidosis is small when one considers how widely metformin is used,” explains the ADA. That metformin has been used safely in patients with contraindications can be viewed as evidence that it does not cause lactic acidosis.”

The report goes on to explain that — like most drugs when taken in dangerously large quantities –metformin can lead to fatal lactic acidosis when overdosed.

Patients at greatest risk for developing lactic acidosis while taking metformin are those with other conditions including kidney or liver issues, a history of heart attacks or acute heart failure, and patients who drink alcohol frequently. When discussing metformin with your healthcare team, be sure to express any concerns to your doctor.

Fortunately, there are a few things you can do to alleviate, lessen, or altogether prevent the stomach distress caused by metformin.

Take your dose during your meal, not before

The first is to take your metformin dose halfway through eating your meal rather than before you start eating. Patients report far less stomach distress if there is already food within their stomach by the time their metformin dose is being digested, too.

Start with a very small dose

By starting with an extremely small dose, instead of the full dose your doctor would normally prescribe for your height and weight, you may be able to drastically reduce those initially uncomfortable side effects. Talk to your doctor about adjusting your doses in order to give your body time to acclimate to the drug.

Ask for the “extended release” version

Too often, doctors prescribe the regular version without any consideration of the extended-release (ER) version. By taking the ER version, each dose is being introduced over the course of hours and hours versus all at once, which significantly reduces the unwanted gastric side effects. While it does cost more, it could greatly metformin’s side-effects. However, you will need to try the regular version first. This is so your doctor can tell your insurance company you tried it, and it wasn’t the right medication for you. Then they will be more likely to cover the more extended “ER” version.

Combine it with other diabetes medications

Again, there are simply some people who do not tolerate metformin. If you find you cannot bear to endure the side effects, talk to your healthcare team. If you choose to stop taking metformin, your healthcare team can help you find a different type of diabetes medication to improve your blood sugar levels.

For patients who take metformin long-term, your vitamin b12 levels should be tested annually. Research shows that a small percentage of patients taking metformin develop deficient b12 levels which can be managed with supplemental b12 vitamins. Discuss this with your healthcare team if you’ve been taking metformin for more than one year.

Metformin might help to lower your blood sugar levels, but your quality of life matters, too. The side effects of metformin can be brutal, and for many, worth avoiding. There are many, many, many other diabetes drugs out there, and most of them are not like metformin at all. Don’t give up and don’t just quit the drug without talking immediately with your healthcare team to find a better alternative for you.

You shouldn’t take metformin if…

Like most medications, there are a few types of patients who shouldn’t take metformin. For metformin, the concern is based largely around the fact that it can raise your risk of producing too much lactic acid. Clearing that lactic acid from your body requires healthy organ function!

If you have diagnosed kidney or liver issues: Your liver and your kidneys both play a critical role in clearing metformin from your body. If your kidneys or liver are already struggling to function, you wouldn’t want to add to their workload by taking metformin.

If you have had a heart attack or acute heart failure: Serious heart conditions can affect how much blood is pumped to your kidneys, which can reduce your overall kidney function. Because the kidneys play a crucial role in clearing metformin from your body, patients with a history of heart issues should not take metformin.

If you drink alcohol often or in great quantity: Again, because metformin relies on the function of a healthy liver and kidneys, a person who drinks large amounts of alcohol on a regular basis would be putting themselves at an increased risk for other issues if they took metformin. If you are concerned about your personal alcohol consumption, take a look at these helpful resources listed at Alcohol.org.

If you found this guide to Metformin side effects useful, please sign up for our newsletter (and get a free chapter from the Fit With Diabetes eBook) using the form below. We send out a weekly newsletter with the latest posts and recipes from Diabetes Strong.

Previous Post: « Diabetes and Your Eyes: Everything You Need to Know
Next Post: What are Normal Blood Sugar Levels? »